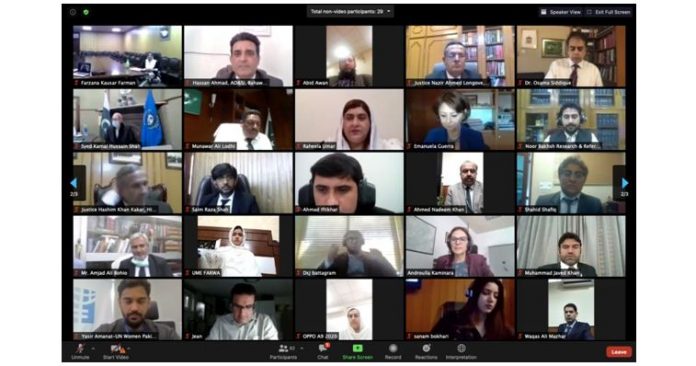 In her opening remarks, the Ambassador of the European Union to Pakistan, Androulla Kaminara thanked the Honourable Chief Justice of Pakistan for his support to the workshop and the LJCP for its organization

ISLAMABAD,: The Law and Justice Commission of Pakistan (LJCP) and the European Union launched a two-day online workshop on improving access to justice under the aegis of the EU’s Technical Assistance and Information Exchange (TAIEX) Programme today.

The workshop will allow for an unprecedented exchange of practices and experiences between European and Pakistani judicial experts on informal dispute settlement systems, mediation and free legal aid to improve access to justice for all Pakistani citizens.

This is particularly important as improving access to justice is a priority area for the European Union and also in the context of Pakistan’s recently passed legal aid bill – the Legal Aid and Justice Authority Act 2020. During the workshop, four judges from Germany, Italy and Sweden will present the judicial systems in their respective countries and discuss their experiences and expertise with 80 high-level participants from the Pakistani judiciary.

The Honourable Mr Justice Mushir Alam, Senior Puisne Judge, Supreme Court of Pakistan, chaired the panel of experts from the Supreme Court of Pakistan, sharing the Pakistani perspective and context. Honourable Mr Justice, Syed Mansoor Ali Shah, presented the state of play in Pakistan. In his opening remarks, Mr J. Mushir Alam expressed thanks and gratitude on behalf of Pakistan’s justice sector to the EU Ambassador in Pakistan Ms. Androulla Kaminara and the TAIEX management for organizing this useful activity.

Mr. Justice Mushir Alam further said, “…Indeed, the Webinar activity on informal settlement of disputes would go a long way in establishing an effective dispute resolution platform in Pakistan which is presently at a rudimentary stage, vis-a-vis, international context, however, I hope such collaborative efforts would give us the required impetus and motivation, and would pave the way for establishing a viable organisational platform and a meaningful legal framework supported by advancing technologies, and widely perceived ease of doing business in Pakistan.” Justice Mushir Alam expressed the hope that the EU would organise such activities again in the future, especially focusing upon the use of advancing technology in online dispute settlement to bring efficiency and transparency in the process.

In her opening remarks, the Ambassador of the European Union to Pakistan, Androulla Kaminara thanked the Honourable Chief Justice of Pakistan for his support to the workshop and the LJCP for its organisation.

She said, “This is a first step to further strengthening the ties between European and Pakistani judiciaries. Pakistan and the EU agreed in their joint Strategic Engagement Plan to use institutional contacts to strengthen cooperation and exchange expertise on the functioning of civilian democratic bodies and safeguarding fundamental human rights. This event also complements the EU Rule of Law Programme, in which the LJCP is a key partner.”

Other key speakers included representatives of the Pakistani academia and the United Nations Office on Drugs and Crime (UNODC). Dr Muhammad Raheem Awan, Secretary Law and Justice Commission of Pakistan, is acting as the Focal Person for the event.

The two-day workshop will focus on ways to reduce the backlog of cases pending at courts, extrajudicial settlement of disputes, mediation and arbitration in commercial and family law and ways to develop them further through reform of legal framework and court processes.

There will also be a discussion on recent trends in digitalization, the use of advancing technologies, data exchange and data management. The European judges will present European systems of free legal aid, with a view to determining which practices could be integrated into the Pakistani legal and judicial system to make it more effective, responsive, accessible, transparent and efficient. There may be future cooperation between the LJCP and the EU’s TAIEX Programme to narrow down topics and deepen the exchange between stakeholders from the Pakistani justice sector and EU legal experts.

TAIEX is a programme of the European Union that mobilises technical support in EU Member States in response to requests for knowledge sharing and exchange from public institutions in partner countries. This is the first event in Pakistan, aiming at establishing institutional partnerships between European and Pakistani judiciaries.