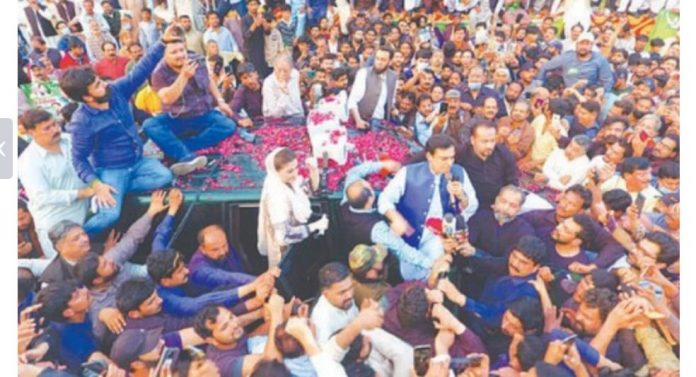 LAHORE, FEB 28: PML-N vice president Maryam Nawaz on Saturday hinted at the chance that the Pakistan Democratic Movement’s (PDM) long march, planned for the next month to supposedly oust the Imran Khan government, may not be held after all.

“There is a possibility that the long march may not be needed,” said the PML-N leader in reply to a question whether the PDM’s long march would end before moving beyond the PML-N’s bastion of Gujranwala.

She was talking to reporters here on Saturday before receiving her cousin Hamza Shehbaz, who was released from the Kot Lakhpat Jail on bail after spending 20 months in prison in a money laundering case instituted by the National Accountability Bureau (NAB).

Earlier, Maulana Fazlur Rehman, the president of the opposition alliance PDM, had announced that the long march on Islamabad would be held from March 26 to overthrow the government.

Ms Nawaz, however, did not explain why the march might not be needed. But, she did declare that people were fully prepared for it.

Answering a question about the PML-N joining hands with the ruling Pakistan Tehreek-i-Insaf (PTI) over the Senate polls in Punjab from where all 11 candidates have been elected unopposed, she said: “It is better if you do not ask me about this.”

Five Senate seats went to the PTI and PML-N each and one to the PML-Q, an ally of the ruling party.

A source close to her said that Ms Nawaz was not happy over her party’s decision to go for an unopposed Senate election in Punjab. Ms Nawaz wanted the election in Punjab on March 3 to expose the fissures within the PTI. She is of the view that through the unopposed election, the opposition had provided relief to Imran Khan, the source said.

The PTI has credited PML-Q senior leader and Punjab Assembly Speaker Chaudhry Parvez Elahi with evolving a consensus among the ruling party and the opposition — PML-N and PPP — to have their senators elected as per their numbers in the Punjab Assembly.

“There was no rigging, no quarrel, and no bickering. The Senate polls were held successfully in Punjab. Another successful inning of the Pakistan Muslim League for strengthening democracy,” PML-Q MNA Moonis Elahi had tweeted.

Critical of Prime Minister Imran Khan, Maryam Nawaz said only one constituency (NA-75) had exposed the “theft” by Imran Khan. “He used to talk about free and fair elections and umpires. In this by-poll, the umpire was kidnapped and even then he [Imran Khan] failed to win this election.”

Ms Nawaz hoped that the disgruntled PTI members would vote for the PDM candidate, Yousuf Raza Gilani, for an Islamabad Senate seat against Hafeez Sheikh. “Imran Khan got selected last time through rigging, but in the future he stands no chance and his party’s lawmakers know this. Therefore, some of them will not vote for the PTI candidate,” she claimed.

When asked about her cousin Hamza Shehbaz’s role in the PML-N, Ms Nawaz said: “Hamza has worked for the party relentlessly. We both are helping each other. Whatever duty the party assigns us we will do it.”

A good number of PML-N workers had gathered outside the Kot Lakhpat jail to receive the opposition leader in the Punjab Assembly. Upon his release, Mr Hamza and Ms Nawaz led a rally of party workers towards the Sharifs’ Model Town residence. At a couple of points, he also addressed the charged party workers.

Speaking on the occasion, Mr Hamza said: “No corruption has been established against me, Nawaz Sharif, Shehbaz Sharif, Maryam Nawaz and Ahsan Iqbal. This government has not launched a single development project in about three years.”

He said the opposition could not sit with “vote, sugar and flour thieves”, adding that the government had made the life of the common man miserable.

PML-N information secretary Marriyum Aurangzeb said the opposition leader had braved 20 months of illegal imprisonment and responded to Imran Khan’s political victimisation with courage and resilience. She said Mr Hamza had become a symbol of defiance against persecution by the “NAB-Niazi unholy alliance”.

The former information minister said: “The PTI could not prove a single penny of corruption by Hamza even after exhaustive abuse of power, illegal detention, mental torture, smear campaign and unconstitutional treatment. The role of the NAB-Niazi alliance will always be quoted as one of the darkest chapters in history.”

The Lahore High Court on Wednesday granted bail to Hamza Shehbaz in a money laundering reference. Mr Hamza had sought bail primarily on the ground of inordinate delay in conclusion of the trial proceedings after the Supreme Court denied him the relief with a directive to approach the high court with fresh grounds.