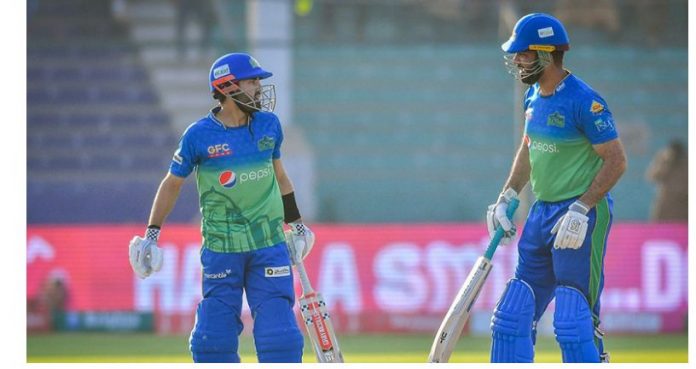 Mohammad Rizwan and Shanwaz Dhani’s outstanding performance helped Multan Sultans in registering their first win of the Pakistan Super League (PSL) 2021 as they defeated Lahore Qalandars by seven wickets at the National Stadium in Karachi on Friday.

After winning the toss, the Sultans’ captain elected to field first and his decision proved a correct one as Qalandars only managed to post 157-6 in their allotted 20 overs.

Mohammad Hafeez continued his exceptional form and finished the innings with the top score of 60 off 35 balls with the help of three fours and five sixes.

For the winning team, young pacer Dhani and Carlos Brathwaite were the star performers as they claimed two wickets each.

In reply, Sultans managed to chase down the target in the 17th over at the expense of just three wickets.

Captain Rizwan continued his great run with the bat in hand and finished the match with the top score of 76 off 49 balls with the help of 12 fours.

He was well-supported by Sohaib Maqsood who remained unbeaten on 61 off 41 balls with the help of seven fours and two sixes.

For Qalandars, left-arm pacer Shaheen Shah Afridi was the pick of the bowlers as he claimed figures of 2-29 in his quota of four overs.

For his outstanding batting performance, Rizwan was named player-of-the-match.