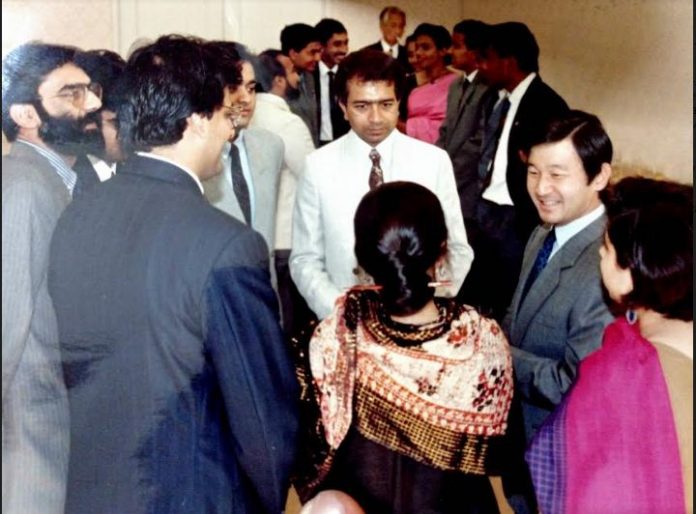 Heartfelt felicitations and best wishes to the Emperor Naruhito on his 61st birthday falling on February 23. I pray and wish the Emperor may live a long and healthy life.

I am indeed glad to mention that I have the honour to meet His Majesty in October 1992 while I was invited by the Japan’s foreign office under the South Asia Youth Invitation Programme. Then His Majesty was the Crown Prince, a very friendly and elegant person with a charming smile as the readers can see in the photograph sent to me by his office. It was the historic day in my life, and it never came again. I wish if I could see the Crown Prince as His Majesty the Emperor of Japan to mark another historic day in my life.

The Crown Prince of Japan Naruhito took the Throne as an emperor to begin the new era – Reiwa, the beautiful harmony era. His father Emperor Akihito abdicated on 30 April 2019, and the Heisei (achieving peace) era ended 30 years after he had been on the Chrysanthemum Throne. Emperor Akihito has been the first Japanese emperor to abdicate since 1817. I believe this new tradition would blossom an era of new colours and fragrances, prosperity of the Japanese people, and international support and cooperation.

After heart surgery and treatment for prostate cancer, Emperor Akihito, 85, has hinted for some time that he wanted to step down for health and age reasons. “I am worried that it may become more difficult for me to carry out my duties as the symbol of the state,” he said in 2016 in a rare televised address. Japan’s monarchs are expected to serve until death, but parliament passed special legislation to allow Akihito to step down.

Emperor Naruhito was born on February 23, 1960 as Akihito’s eldest son. He grew up with his siblings and parents in Tokyo’s most-protected Imperial Palace. After earning a history degree at Gakushuin University, where he wrote a thesis on medieval water transport, the prince became the first Japanese royal to study overseas when he spent two years at Merton College, Oxford. The book he wrote chronicling his time there, The Thames and I: A Memoir of Two Years at Oxford, has just been re-issued in English.

As the Crown Prince, His Majesty’s interest in water management extends beyond academia. Since 2007, His Majesty has served as honorary president of the U.N. Secretary General’s Advisory Board on Water and Sanitation, and he has spoken frequently on the topic at international conferences. “He has been actively involved in international environmental issues in recent years,” Hideya Kawanishi, associate professor at Nagoya University and an author of several books on Japan’s emperors, told the popular weekly TIME.

Emperor Naruhito’s hobbies include mountain climbing, jogging, tennis, skiing and playing the viola, according to the Associated Press.

The people worldwide are having a lot of admiration for the new emperor. The experts expect the new emperor to continue Akihito’s “people-focused” sense of duty, but with carefully chosen embellishments that reflect his international outlook. Having served in the UN Secretary General’s office on water and sanitation, many foresee his proactive role in the arena of international development too.

Recently, the Japanese government has signed import of skilled and highly skilled workers from Pakistan as the Pakistan-Japan relations are getting more cordial in the new era. I believe that the trade and culture exchange between both countries would come to the same level where it has been in the recent past. We all know that Japan has remained one of the major bilateral development partners of Pakistan since 1954, extending assistance in multi-faceted sectors. The total amount of Japan’s economic assistance to Pakistan by March 2020 amounts to USD 13 billion and this makes Japan the second largest economic partner of Pakistan.

Next year (2022) will be the 70th anniversary of the Pakistan-Japan diplomatic relation. We all Pakistanis shall come forward to join hands with the Japan embassy to celebrate this historic peak of relationship in a splendid way.=DNA