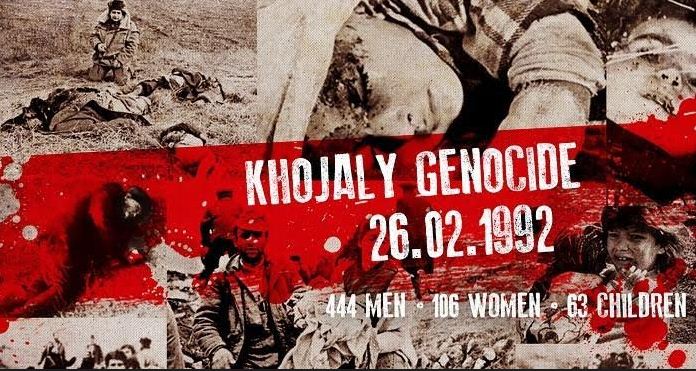 29 years ago, the Armenian military units carried out an act of genocide in the Khojaly city of Azerbaijan with a population of 7,000 on February 26, 1992.

This genocide of ethnic Azerbaijanis was carried out by the Armenian military with particular ruthlessness and unthinkable brutality.

During the Khojaly genocide, 613 people were killed, 1,000 civilians of various ages became disabled as a result of the bullet wounds received. As many as 106 women, 63 young children, 70 old men were killed, eight families were completely destroyed, 25 children lost both parents, 130 – one of the parents. On the night of the tragedy, 1,275 civilians were captured, and the fate of 150 of them is still unknown.

Armenians committed the genocide in Khojaly in the most terrible way: some civilians were shot at close range, while others were scalped, beheaded, burned alive, had their eyes gouged out and were subject to other kinds of painful death. The attackers had no mercy even on the Azerbaijani women – they were raped and the babies of the pregnant ones were inhumanly taken out of the abdomen and nailed to the walls.

The Khojaly massacre was one of the most serious crimes not only against the people of Azerbaijan, but the humanity as a whole.

The events that have unfolded around Nagorno-Karabakh since 1988 led to the destruction of villages, cities, the death of tens of thousands of innocent people, the expulsion of hundreds of thousands of Azerbaijanis by Armenia from their historical lands.

Azerbaijan’s nationwide leader Heydar Aliyev unveiled the essence of Khojaly genocide and in February, 1994, the Parliament of the Republic of Azerbaijan gave legal and political assessment of this crime, issuing a resolution. The document describes causes of the tragedy and its perpetrators.

The Khojaly Maasacre has been recognized as Genocide by 18 countries including Pakistan, 26 states of the USA and by the Organization of Islamic Cooperation and Turkic Council.

The Azerbaijani people will never forget the genocide in Khojaly, which was one of the most terrible massacres against civilians in the history of mankind. Every year, the Azerbaijani government and society hold events dedicated to commemorating this crime against humanity.