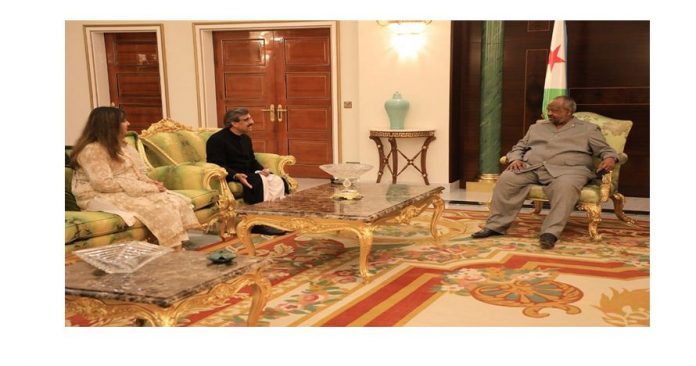 During the bilateral meeting, the President welcomed the Ambassador and expressed his strong desire to build closer partnership with Pakistan including security, trade and science & technology sectors.

The Ambassador highlighted Pakistan’s “Engage Africa Policy” and informed that the Government of Pakistan has decided to open five new Embassies in Africa, the first being in Djibouti, which is reflective of Pakistan’s intention to build bridges of cooperation with Djibouti

The Ambassador underscored the desire of the Government of Pakistan to play an important role in IGAD region to promote partnership in all realms of life including agriculture, science & technology, maritime safety and climate change sectors and specifically to mitigate poverty in the region. The Ambassador briefed the President about #CPEC and highlighted that CPEC is instrumental in solidifying our relations with China. The Ambassador also wished to expand Pakistani frontiers of trade with African states.

On Jammu & Kashmir issue, the Ambassador also highlighted the growing atrocities by the Indian government and military in violation of international law and their nefarious efforts to change the geography and demography of #IIOJK.

The President welcomed the laying of undersea Pakistan-East Africa Cable Express (PEACE), linking, at the first stage, Gwadar to Djibouti.