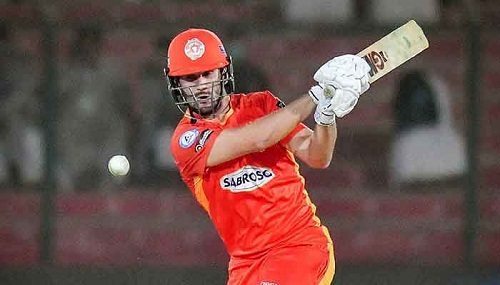 KARACHI : Islamabad United’s English all-rounder Lewis Gregory is hopeful of continuing his performance with the bat and ball for his team in the sixth edition of the Pakistan Super League after he guided his side to a 3-wicket win over Multan Sultans in Karachi.

The 28-year-old all-rounder’s 49-off-31 with the bat lead his side’s fightback from 74-6 to chase 151 for the loss of 7 wickets. In the first innings, he took the wickets of James Vince and Khushdil Shah to restrict Multan Sultans to 150/8 in 20 overs.

“It is great to get a win on the board up front. Hopefully can build a lot of confidence from that, it is really nice to contribute in any form and to that in a win is really nice,” said the Englishman.

He is hopeful to keep doing the same for Islamabad United in the matches to come.

“Any way that I can contribute towards the team in a positive manner, that’s what I’m going to try and do and it was nice to have a pretty all-round day today with both bat and ball and hopefully there’s a few more to come,” he hoped.

He was also glad to be playing in front of some crowd in Pakistan, although he was still missing playing in a full house on Pakistani grounds.

“It is great to have some crowds in obviously, it’d be nice to have a full house but the way the world is at the moment, it is just great to play in front of people and try and entertain as much as we can. It is a great experience, obviously as cricket is mad out here so it’s amazing to be out here and playing in front of them,” he said about playing in front of Pakistani spectators.

Zalmi in trouble as Kamran departs early in 199-run chase

Aleem Zafar an artist with a lot by his name!

Hania Amir has a message for Wikipedia