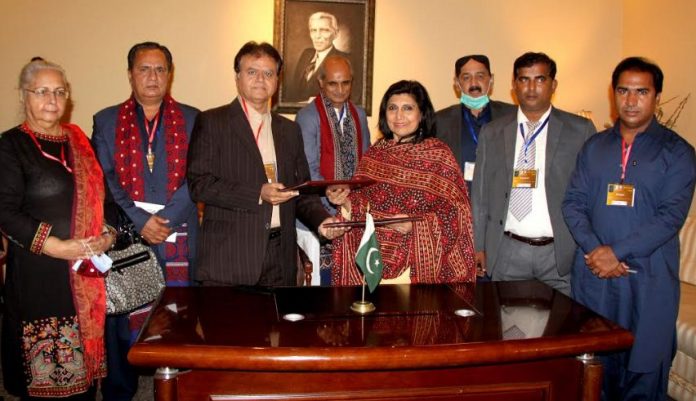 ISLAMABAD, FEB 21 (DNA)  – Pakistan National Council of the Arts (PNCA) is going to set-up its Regional Culture Centre in Jamshoro, Sindh. A Memorandum of Understanding with Department of Culture, Tourism, and Antiquities, Government of Sindh has been signed today. Dr. Fouzia Saeed, DG PNCA and Mr. Ghulam Akbar Leghari, Secretary, Culture, Tourism, and Antiquities, Government of Sind signed the agreement here in Islamabad.

This cultural cooperation between the two organizations allow PNCA to bring national level cultural program to Sindh and explore new avenues to engage the artist’s community of the region especially youth in a broader way.

Mr. Ghulam Akbar Leghari, Secretary, Culture, Tourism, and Antiquities, Government of Sind, Karachi termed this MoU a new beginning for the promotion of Sindhi art and culture at national and international level. He thanked Dr. Fouzia Saeed for taking this initiative and extending cooperation for the promotion of the art and culture of Sindh at National and International level.

For achieving the common goals, the Secretary said, there was a need for accelerating cultural activities to further promote the tangible and intangible culture and traditions of Sindh, through conducting training programmes for capacity building in the field of art and culture. Talking to journalists after signing the MoU, PNCA Director General Dr Fouzia Saeed said: “The arrangement will allow both the parties to initiate collaborative programmes of mutual interest and understanding to share a common mandate of promotion of the art, culture of Sindh.”

This will open new horizons for younger generation to learn about the power of cultural capital and indigenous knowledge in true perspective, she hoped. She was of the opinion that PNCA has been too Islamabad Centric and its time that it should reach out to the provinces and establish itself there in collaboration the provincial governments, as PNCA has a national mandate and is not an Islamabad Arts Council.

She also highlighted the role of Mr. Shafqat Mehmood, Federal Minister for National Heritage and Culture Division, government of Pakistan who is very keen to promote the regional as well as international cultural exchange to portray the true image of Pakistan and its centuries old cultural traditions.

The Culture Department of Sindh will provide space in the premises of Sindh Institute of Music & Performance Arts (SIMPA) for PNCA’s Regional Culture Centre. The Department will extend cooperation for undertaking joint cultural programs to promote further the culture of Sindh on a larger scale, nationally and internationally. The common goal of both organization is to accelerate the cultural activities to further preserve and promote the cultural traditions of the people of Sindh.

PNCA will extend its cooperation for cultural education, dissemination of related information including the transmission of knowledge and cultural development and training of human resource in the fields of art and culture. The main aspect of this kind of cooperation is to open new horizons for younger generation to learn about the power of cultural information with correct perception.