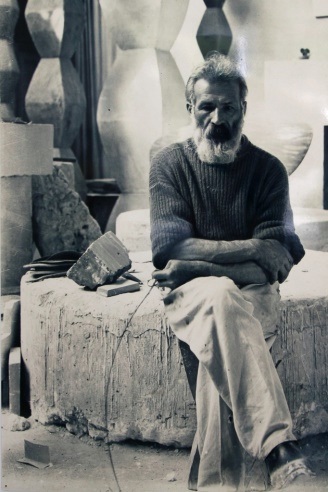 On 19th February in Romania is celebrated ”Brancusi Day” as a national holiday in honor of Constantin Brancusi, one of the most influential sculptors of the 20th-century and a pioneer of modernism, called also ”the patriarch of modern sculpture”.

This year is celebrated 145 years since Constantin Brancusi was born in Hobita (Romania), on 19th February 1876. A passionate wood-carver, he produced numerous wood sculptures, often with a folk flavour, and he frequently carved prototypes for works later executed in other materials. He is best known for his abstract sculptures of ovoid heads and birds in flight.

Constantin Brancusi in his studio

Formal studies took him toCraiova School of Arts and Crafts, where he pursued his love for woodworking, graduating with honors in 1898 and then to Bucharest School of Fine Arts, where he received academic training in sculpture. He worked hard, and quickly distinguished himself as talented. He continued his studies in Munich, and École des Beaux-Arts in Parisand was invited to enter the workshop of Auguste Rodin. Even though he admired the eminent Rodin he left the Rodin studio after only two months, saying, “Nothing can grow under big trees”. He continued

After leaving Rodin’s workshop, Brâncuși began developing the revolutionary style for which he is known. His first commissioned work, The Prayer, was part of a gravestone memorial.

It depicts a young woman crossing herself as she kneels, and marks the first step toward abstracted, non-literal representation, and shows his drive to depict “not the outer form but the idea, the essence of things.” He also began doing more carving, rather than the method popular with his contemporaries, that of modeling in clay or plaster which would be cast in metal, and by 1908 he worked almost exclusively by carving.

In the following few years he made many versions of Sleeping Muse  and The Kiss, further simplifying forms to geometrical and sparse objects.

His works became popular in France, Romania and the United States and in 1913 Brâncuși’s work was displayed at both the Salon des Indépendants and the first exhibition in the U.S. of modern art, the Armory Show.

One of his major groups of sculptures involved the Bird in Space — simple abstract shapes representing a bird in flight.

The works are based on his earlier Măiastra series.In Romanian folklore the Măiastra is a beautiful golden bird who foretells the future and cures the blind. In 1938, he finished the World War I monument in Târgu-Jiu (Romania) where he had spent much of his childhood. Table of Silence, The Gate of the Kiss, and Endless Column commemorate the courage and sacrifice of Romanians who in 1916 defended Târgu Jiu from the forces of the Central Powers.

The Gate of The Kiss

Brâncuși spent most of his artist career in France and in 1952 he became a French citizen. He  died on March 16, 1957, aged 81. He was buried in the Cimetière du Montparnasse in Paris.

At his death Brâncuși left 1200 photographs and 215 sculptures. He bequeathed part of his collection to the French state on condition that his workshop be rebuilt as it was on the day he died. This reconstruction of his studio, adjacent to the Pompidou Centre, is open to the public nowadays.

Brâncuși was elected posthumously to the Romanian Academy in 1990.

Google commemorated his 135th birthday with a Doodle in 2011 consisting of seven of his works.

Brâncuși’s works are housed in the National Museum of Art of Romania (Bucharest), the Museum of Modern Art (New York) and other museums around the world. The Philadelphia Museum of Art holds the largest collection of Brâncuși sculptures in the United States.

A small copy of The Endless Column of Brancusi can be observed in the central part of Islamabad, to the Allama Iqbal – Mihai Eminescu Monument, a symbol of friendship between Romania and Pakistan.