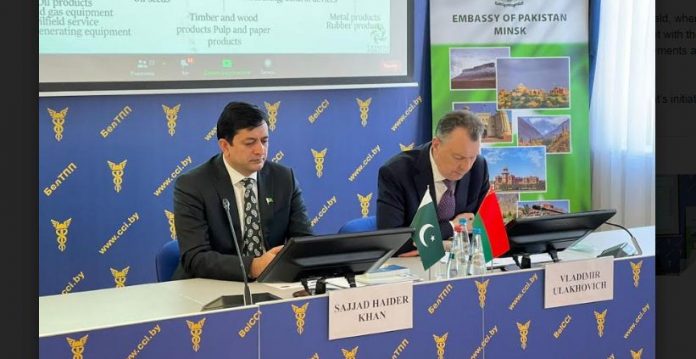 BELARUS, FEB 19 (DNA) – The Embassy of Pakistan, Minsk in collaboration with Belarusian Chamber of Commerce & Industry (BelCCI) organized a business interactive event at the BelCCI, which was attended by businessmen/representatives from more than 100 Belarusian companies, out of which 33 firms participated physically while another 72 businesspersons participated in the business event through Zoom on virtual basis.

Welcoming the participants of the business event titled “Meet the Ambassador”, the Chairman of the Belarusian Chamber of Commerce and Industry Mr. Vladimir Ulakhovich impressed upon the need to working closely for greater economic cooperation and assured his full cooperation.

On the occasion, Ambassador Sajjad Haider Khan made a detailed presentation on “Pakistan-Belarus Trade Prospects”, particularly highlighting Pakistan’s demographic advantages, political and economic strength and trade potential. Referring to the excellent political relations between the two countries, Ambassador Khan pointed out that the existing trade ties was much below the potential, which crossed US $ 52 million during 2020. He urged the participants to take advantage of the improving trade and investment climate in Pakistan in the context of the government’s initiatives and reform agenda.

Mr. Nasir Hamid, Minister (Trade & Investment) at the Embassy of Pakistan, Moscow also briefed the participants over investment and tourism potential of Pakistan through video link. He highlighted the rich economic prospects offered by China-Pak Economic Corridor (CPEC) and the benefits of enhanced regional connectivity for the firms investing in Pakistan as the project nears fruition.

Two short video documentaries on Pakistan were also screened for the participants after which detailed Q&A session was held, whereby the queries of the participants, both of those attending physically as well as those virtually were addressed. Ambassador Khan subsequently met with the individual businessperson at the networking session responding to the precise queries of Belarusian businesspersons regarding exports, certifications, payments and other procedures. The guests were also entertained with a select Pakistani cuisine.

The event was organized as part of the efforts of the Mission to galvanize the business community in the spirit of government’s initiative to add emphasis to economic diplomacy and facilitate the increase in national exports.