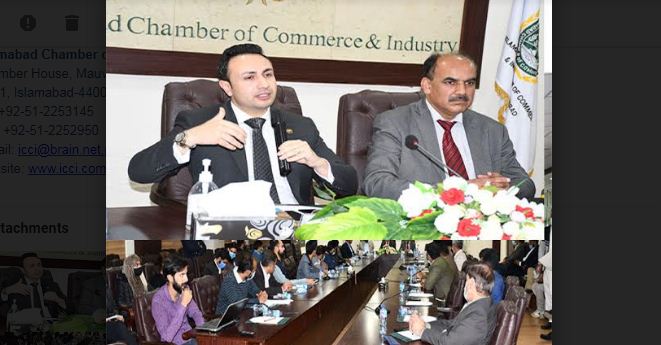 ISLAMABAD, FEB 19 (DNA) – Sardar Yasir Ilyas Khan, President, Islamabad Chamber of Commerce & Industry (ICCI) has called upon the government to focus on new policy reforms in order to generate indigenous resources instead of depending on IMF loans to run the economy as borrowing from IMF is not a long-term solution to address the issues of the economy.

He said that injection of fresh cash into a bleeding economy without making structural reforms would not help Pakistan to overcome its economic problems.

He said that by making frequent borrowings from IMF, Pakistan has been piling up its foreign debt burden thus making future of taxpayers and our generations bleaker. He said this while addressing a meeting of business community at Islamabad Chamber of Commerce & Industry.

He said that the government has recently further hiked the electricity tariff by Rs.1.95 per unit which will further enhance the cost of doing business while notices from FBR to businesses for late tax filing will also discourage the new taxpayers from coming into the tax system.

He said that ever since the signing of the last financing facility with IMF, the government has depreciated rupee by almost 40 percent, made repeated hike in prices of electricity, gas and oil products and increased import duties to pass on all the liabilities of IMF to the businesses and the general public. However, all these measures have combined to make a great increase in the cost of doing business.

ICCI President urged that Pakistan must expand its tax base to address the issue of fiscal deficit. However, for increasing tax revenue, the government must focus on drastic tax reforms to make the complicated tax system easy and simple for taxpayers and avoid all coercive tactics, which shatter the confidence of the business community. He said that the government should take Chambers of Commerce & Industry on board to bring non-filers into the tax net because without broadening the tax base, Pakistan would never be able to reduce the fiscal deficit, generate surplus revenue and get rid of foreign debt burden.

Sardar Yasir Ilyas Khan said that Pakistan was mostly dependent on limited items for exports like textiles, surgical instruments, leather products and urged that the government should give more focus to promoting exports of agricultural, IT, engineering, pharmaceutical and other non-traditional products in which the country enjoyed competitive advantage.

He said that tourism was another potential area to earn billions of dollars for the country and the government should announce attractive incentives for the private sector to invest in tourism infrastructure development on a public-private partnership model. He said that Dubai generated around USD 22 billion and UK around Pound 106 billion from tourism and Pakistan could also strengthen its economy by promoting tourism for which conducive policies were needed.=DNA