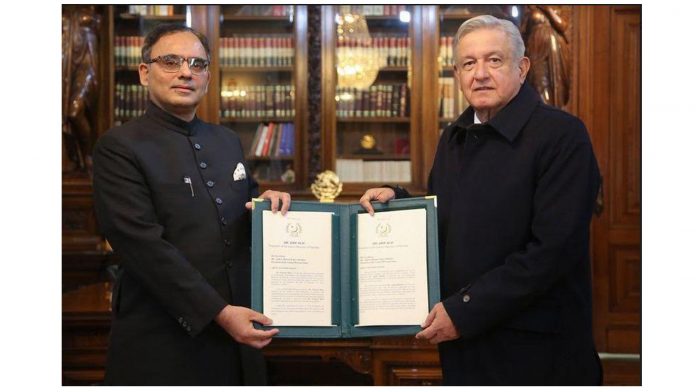 MEXICO, FEB 17 – Ambassador Dr Aman Rashid presented his credentials to President Andrés Manuel López Obrador of the United Mexican States on 16 February 2021, in a simple but graceful ceremony held at the National Palace, Mexico City. Following the ceremony, a meeting was held with President López Obrador wherein he conveyed greetings of the leadership of Pakistan to the President and to the friendly people of Mexico.

Ambassador thanked the President for the warm welcome extended to him on his arrival and reiterated the resolve to strengthen the bilateral relationship, not only in areas of commerce and trade but also at the international forums and promote people to people contacts.

Mexican President reiterated his invitation for Prime Minister to participate in the celebrations to be held in Mexico City in September 2021, commemorating three historical milestones in the formation of the Mexican nation. Foreign Minister Marcelo Ebrard, who was also present in the meeting, conveyed the Mexican government’s desire to expand diplomatic outreach in the South Asia region and open Mexican embassy in Islamabad. Mr Saeed ur Rahman, Deputy Head of Mission, accompanied the Ambassador.