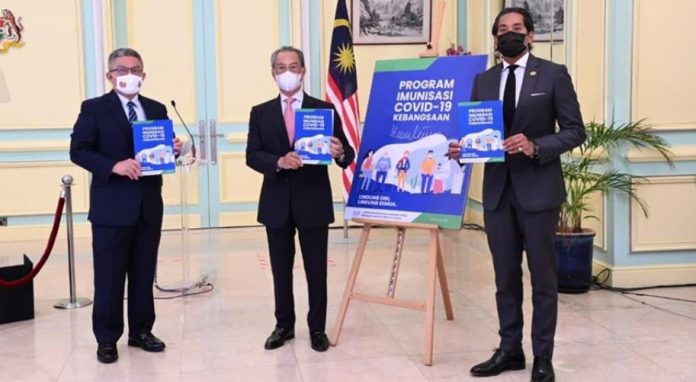 JAKARTA, Indonesia, FEB 16: The Malaysian prime minister on Tuesday said the first shipment of coronavirus vaccines produced by Pfizer-BioNTech will arrive in the country on Feb. 21, and the inoculation drive will begin five days later.

“The vaccination program will be rolled out on Feb. 26,” Muhyiddin Yassin said during the launch of a handbook on the national immunization plan. A web portal has also been created for the public to better understand how the vaccine will be distributed.

Muhyiddin said he will be the first to receive the jab to boost public confidence over its safety, and the campaign will be implemented in three phases over a period of 12 months.

“This comprehensive program is aimed at ensuring herd immunity to stop the spread of COVID-19 infections and bring an end to the pandemic,” he said.

The first phase will run until April and include frontline staff, while the second phase, which involves high risk groups such as the elderly and those suffering from chronic conditions, is slated for April until August.

The third phase is for adults age 18 and above and will take place from May until February 2022.

Malaysia aims to vaccinate at least 80% or 27 million of its 32 million population within a year.

Science Minister Khairy Jamaluddin in a tweet said 312,390 doses of the vaccine will arrive at the Kuala Lumpur International Airport in the first shipment.

The Southeast Asian nation also has supply agreements with other manufacturers. Their vaccines, however, are still awaiting authorization from the National Pharmaceutical Regulatory Agency.

Its virus caseload currently stands at 266,445, including 976 related deaths.