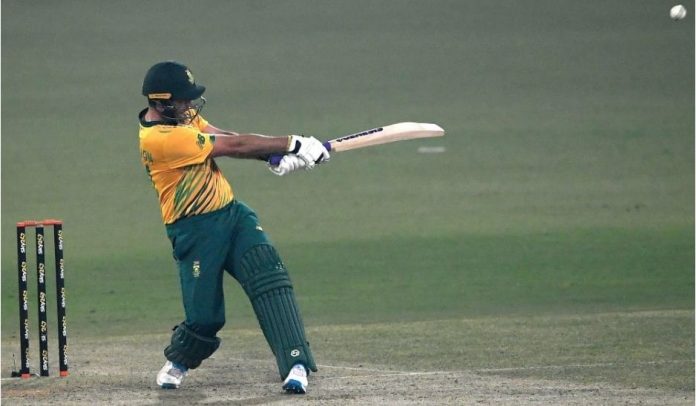 LAHORE, FEB 13 – South Africa won the second Twenty20 International against Pakistan by six wickets at the Gaddafi Stadium in Lahore on Saturday.

Pite van Biljon and Reeza Hendricks both scored 42 as South Africa chased down a modest 145-run target in just 16.2 overs. The third and final match is on Sunday, also in Lahore.

David Miller and captain Heinrich Klaasen saw the visitors through with more than three overs left.

Shaheen Shah Afridi struck twice for Pakistan early on to get rid of Janneman Malan and JJ Smuts in the first and third over, respectively.

Afridi struck with the second ball of the innings to clean up Malan, giving Pakistan the ideal start. However, the Proteas made a recovery, scoring a flurry of boundaries against pacer Haris Rauf.

Pakistan had scored 144 runs for the loss of seven wickets in 20 overs. Mohammad Rizwan scored a half-century, hitting 51 runs from 41 balls.

According to the Pakistan Cricket Board (PCB), Rizwan is the first Pakistani wicketkeeper-batsman to score 50+ runs in three consecutive T20I matches.

Faheem Ashraf made 30 not out of 12 balls to help Pakistan reach a respectable total after the middle order failed to contribute.

Pakistan lost captain Babar Azam early on in the second over after he was adjudged lbw, managing only five runs.

Youngster Haider Ali was the second to go back into the pavilion after a brilliant catch on the square leg boundary by Lutho Sipamla in the fifth over. Ali scored 10 runs from 11 balls.

The third wicket to fall was Hussain Talat, who was out to Tabrez Shamsi for three runs in the seventh over. Iftikhar Ahmed was the fourth wicket, scoring 20 runs from 21 balls. He was sent back to the pavilion in the 14th over.

Earlier, South Africa had won the toss and opted to field first.

It was Rizwan’s highest-ever score in a T20I match and helped Pakistan set a respectable target for the visitors after the hosts suffered a loss early on when captain Babar Azam was run out in the very first over.

South Africa have made three changes to the squad with Glenton Stuurman, JJ Smuts and Pite van Biljon coming in for Jacques Snyman, Bjorn Fortuin and Junior Dala.

Stuurman will be making his T20I debut for South Africa.