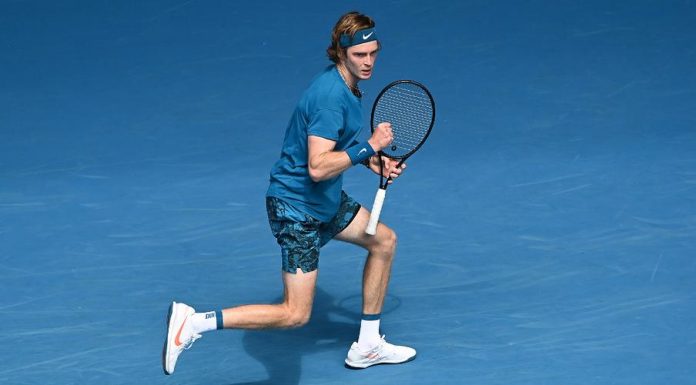 The focused seventh seed has been in impressive form and battled past Brazilian left-hander Thiago Monteiro 6-4, 6-4, 7-6 (10/8) in workmanlike fashion.

He will next play either veteran Spaniard Feliciano Lopez — in his 76th career Grand Slam — or Italian 31st seed Lorenzo Sonego.

“It was a physical match and I’m really happy that I could win in straight sets,” said Rublev. “I’m feeling pretty good. I thankfully haven’t played long matches yet so fully charged for the next round.”

Rublev reached two Slam quarter-finals last year at the US Open and Roland Garros in a breakthrough season that saw him win five ATP Tour titles, more than any other player.

He was also joint top of the list for most matches won, on 41 alongside world number one Novak Djokovic, and has started 2021 on a six-match streak after helping Russia win the ATP Cup.

Rublev, a former junior world number one, broke Monteiro in the third game of the opening set with a baseline winner and again in the eighth game of the second when the Brazilian sent a forehand wide.

The 23-year-old was pushed harder in the third set, with his frustrations evident when he missed an easy volley at 4-4.

His focus briefly wavered with Monteiro working three set points only for Rublev to save them all in holding serve for 5-5.

It went to a tiebreaker and they went point-for-point before Rublev finally got over the line on his third match point.