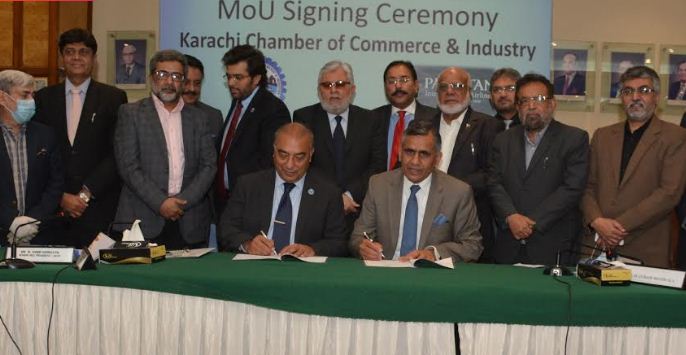 KARACHI, FEB 10 (DNA) – The Karachi Chamber of Commerce & Industry (KCCI) has achieved yet another significant milestone as Pakistan International Airlines (PIA)’s outlet was inaugurated within KCCI’s premises which will be providing 10 percent discount on domestic and international flights not only to KCCI members and staff but also their family members.

Speaking on the occasion, CEO PIA Arshad Malik paid glowing tribute to Late Siraj Kassam Teli for his exceptional services to the country, particularly the business & industrial community. “Because of his splendid work, Siraj Teli would go down in the history and will always be remembered. He was a fatherly figure who fearlessly raised voice for the rights of business community and Karachi city”, he added.

He informed that PIA has recently airlifted a cargo of kinnow and was particularly focused on providing cargo facilities at competitive rates hence, KCCI members should use PIA’s cargo service for sending their cargoes at corporate rates which will be kept lower than the market rates. “You decide the price for cargo and we will live up to it”, he added.

Arshad Malik was of the opinion that the revival of PIA was a challenging task in 2019 but by taking the ownership along with the commitment and sincere efforts, the performance of the national flag carrier was improved however, the airline suffered badly due to COVID-19 pandemic.

He further informed that PIA management was taking every possible step for the betterment of the airline and in this regard, a Voluntary Separation Scheme (VSS) with attractive package was given to some 2000 employees. “Segregation of core and non-core groups was likely while the aircrafts acquired on expensive lease were being returned and replaced with better aircrafts at reasonable rates”, he added.

In response to a suggestion pertaining to commencement of direct flights to northern areas, he said that although PIA was capable of providing direct flight but it was currently not possible due to lack of runways and refueling facilities in many areas of the country. “Keeping in view the potential of Gwadar, the number of direct flights has been raised to three from one as this city is going to become a major hub of economic and financial activities.”

Chairman BMG Zubair Motiwala, in his remarks, appreciated all the efforts being made by CEO PIA to improve the performance of national flag carrier which has to be improved to such an extent that PIA thrives and flies high not only in the skies of Pakistan but also the rest of the world which can become possible only if the government facilitates and provide conducive environment with a focus to restore the lost glories of the national flag carrier.

Keeping in view the performance of other local airlines, he advised CEO PIA to double the number of domestic flights with same kind of treatment and services which were being provided by PIA’s competitors that would surely yield positive results. “We are patriotic Pakistanis and we want to help and support PIA so we would prefer to fly to our destinations via national flag carrier but PIA must improve its services as per international standards”, he added while acknowledging the timely arrival and departure of PIA flights soon after Arshad Malik assumed charge as CEO PIA.

Chairman BMG further appealed the entire business and industrial community to come forward, support and cooperate with PIA in whatever way they can so that PIA could come out of crises and attains success.

In his welcome address, President KCCI Shariq Vohra, while appreciating the efforts being made by CEO PIA to pull the national flag carrier out of crises, stressed the need to make collective efforts and aggressively promote the good things happening at PIA while KCCI, with an impressive membership base, can become a good partner of PIA in various fields.

He was of the opinion that the airlines business has been growing in Pakistan as AirSial, AirBlue and SereneAir have been enjoying thriving businesses with aircrafts flying at full capacity therefore, PIA must also focus on improving the market share by offering its service at competitive rates through cost reduction. “In this regard, the domestic industry has to be integrated with PIA which would certainly reduce cost and save valuable foreign exchange”, he added.=DNA