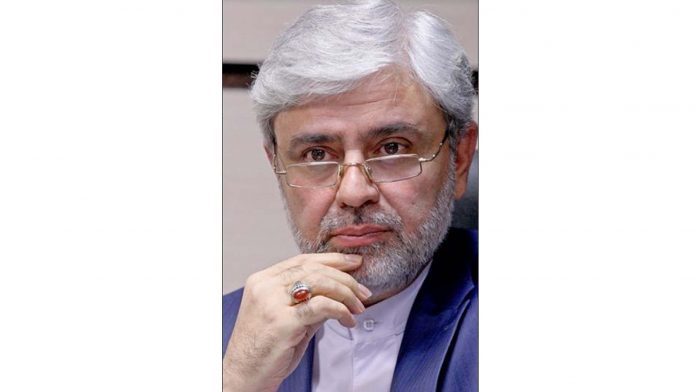 Issues message on the occasion of anniversary of Iran Revolution; says the Iranian people are firmly and zealously following the Islamic Revolution ideals

ISLAMABAD, (DNA): Seyed Mohammad Ali Hosseini Ambassador of Islamic republic of Iran to Pakistan has said he was honored to congratulate forty-second anniversary of the auspicious victory of the “Iran’s 1979 Islamic Revolution” to all of its lovers from Pakistan and around the world.

He said, after the Islamic Revolution in Iran, the value and importance of the friendly and brotherly neighboring country of Pakistan increased more than ever, and the promotion of relations becomes one of the priorities in the foreign policy of the Islamic Republic of Iran.

In a message on the occasion, the Iranian ambassador recognized endeavors of the valiant and resilient people of Iran. He added the tree of revolution is today more robust than any time before and the Islamic Iran is witnessing exemplary self-reliant growth and development; A development, that is based on the might of its women and men in all the fields from science to technology.

Ambassador Hosseini further said, the Iranian people are firmly and zealously following the Islamic Revolution ideals, founded by its main theorist Imam Khomeini, and every year delightedly celebrate the anniversary of their country’s liberation from tyranny.

Obviously, such revolution, with its just and right-seeking approach, wasn’t cherished by supremacist and oppressive powers, so they exploited any opportunity to blemish this revolution and afflict intellectual and political currents that are interested in it.

Imposition of harsh sanctions and maximum pressure against our Islamic Republic, especially in its high- point level of Covid19 crisis; Unilateral pressure on neighboring countries to divert relations from its normal course,

Withdrawing or not fulfilling provisions of JCPOA, which symbolizes the belief and will of the Islamic Republic of Iran to resolve international challenges with peaceful manners,

And assassination of Iranian intellectuals, are just some examples of these hostile approaches to the Islamic Revolution and sample of their attempts to undermine it,  he added.

“Today, four decades after the Islamic Revolution, we are witnessing that the people of Iran, especially Iranian youth, with a serious determination to progress and firm believe to the values of Islamic principles, strive for the betterment and prosperity of their country and stand against unilateralism and external pressure as well as corruption, and injustice. This determination, have created a bright and hopeful horizon for our dear Iran”.

At the end, he emphasized that the Islamic Republic of Iran has extended the hand of peace and friendship to all free and right-seeking nations in the region and beyond, and calls for the realization of true human dignity related values. The Islamic Republic of Iran is encouraging materialization of this ideal and pursuing common interests in the region and the world.