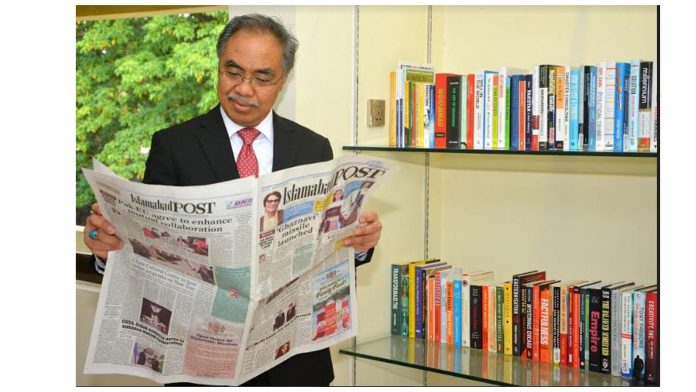 With total population of 1.95 billion in South Asia and 75 million in Central Asia, there exist a huge potential market for the regions; urges Pakistan universities to lay foundation for a solid academic cooperation

“The newly-arrived Ambassador of Indonesia Adam Tugio talked to Islamabad POST, Centreline and DNA News Agency. Here is the first part of the interview that deals with bilateral relations, education and cultural cooperation. The full text of the interview shall be published in the March issue of CENTRELINE”.

ISLAMABAD: Ambassador of Indonesia Adam Tugio has said Indonesia attaches great importance to Pakistan as a reliable partner in South Asia and commends Pakistan’s active role and contribution to maintain regional peace and stability in the region.

“We strongly consider the geo-economic importance of Pakistan, which serves as a hub to connect to Central Asia, South Asia and Middle East”.

The Indonesian ambassador expressed these views while giving an exclusive interview to Daily Islamabad Post. This is his first-ever interview after taking charge of Ambassador of Indonesia in Pakistan.

Ambassador Tugio further said, with total population of 1.95 billion in South Asia and 75 million in Central Asia, there exist a huge potential market for the regions. We should also need to add into this potential, ports infrastructures along 1,046 km coast line of Pakistan that provides access for trade to Middle East and Africa – thus supporting ‘Engage Africa’ economic diplomacy initiative of the Pakistani Government.

Various infrastructure developments on land and harbor that being developed by CPEC will strengthen the connectivity not only within Pakistan but also to the wider regions, and will eventually bring benefit for economic development of Pakistan, he added.

The ambassador said, our relationship is now becoming stronger, dynamic and more comprehensive. “I would especially like to mention here the state visit of President of Indonesia Mr. Joko Widodo to Pakistan in 2018, which opened new avenues of mutually beneficial cooperation. It marked a historic milestone when President Widodo addressed the Joint Session of the Parliament of Pakistan as a special gesture of the democratically elected leader of the largest Muslim populous country and the fourth largest democracy in the world. It was for the second time after President Soekarno, who addressed the highest institution of Pakistan in 1963”.

Talking about some positive developments during the last few years the ambassador said they include  the accomplishment of the 1st Bilateral Political Consultative Forum in 2017, Joint Committee meeting as a follow up of the Defence Cooperation Agreement, relaxation of visa requirements for Pakistani citizens, MoU’s with travel agencies to boost tourism, MoU’s with universities to promote educational linkages, working mechanism of defence cooperation that includes all spectrum of military cooperation (Navy, Army and Air Force).  In addition, Policy Planning Dialogue was initiated by Foreign Ministries of both sides, July 2018 in Islamabad.

He said, Indonesia considers Pakistan as an important partner in South Asia and desires enhanced cooperation with Pakistan at the multilateral forums. Pakistan and Indonesia stand by each other at every platform and support each other for common future of peace, progress, prosperity, stability, and development.

Ambassador Tugio added, both countries highly value their ties and encourage all-around cooperation to further strengthen the fraternal bonds between the two nations. Indonesia and Pakistan also work together in promoting the interest of Ummah in global world, and on global issues of shared concern such as climate change and addressing COVID-19 pandemic.

Talking about the cultural relations Ambassador Adam Tugion said he I believed that culture has the power to reduce the distance and to unite the people with different background, region and traditions. Happily, the Indonesia-Pakistan friendship has a strong foundation of shared values and similarities in culture.  It is true that the similarities are primarily based on the Islamic faith and traditions, but the relationship go even deeper in the history of our two nations as both remained part of the great Buddhist and Hindu civilizations and later their population gradually converted to Islam. It is important therefore, that we constantly nurture these cultural bonds which are greatly valued by our peoples. The promotion of cultural ties is an important part of our efforts to strengthen the people-to-people contact to further foster the bonds of friendship.

Pakistan and Indonesia are also desirous to increase cooperation in the fields of education, science & technology. To foster cultural & academic linkages, the Embassy continues to engage the Pakistani educational and cultural institutions, students and other segments of the civil society. Education is one of the areas that offer some great potential for the bilateral cooperation to benefit from and bring the people of the two countries even closer.

Another attractive area of cooperation with big potential is tourism. It is generally about leisure and pleasure but it also promotes cultural exchange and provides opportunity to people of various cultures to meet and understand each other. It also brings people of the similar taste and profession together and opens up windows of many opportunities.

These days, tourism is one of the fastest growing industries in the world. In addition to the opportunities for recreation, tourism industry has emerged as a big source to generate employment opportunities, grow service sector and help earn foreign exchange. Hence, tourism spurs the overall economic growth worldwide.

Despite very cordial and brotherly ties and having the great existing tourism potential that our two countries offer, it is important to find why the two-way tourists’ traffic is almost limited. Recent statistics of 2019 suggests that tourist arrival in Indonesia from Pakistan has remained very low with only 14,000 tourists from Pakistan.

Pakistan on the other hand is an absolutely stunning country blessed with famous mountain peaks, beautiful green valleys, Mughal architecture, Ghandara art and civilization, religious tourism sites and deserts filled with remnants of ancient civilization. Both the countries can share experiences to develop infrastructure and hospitality industry to facilitate tourism.