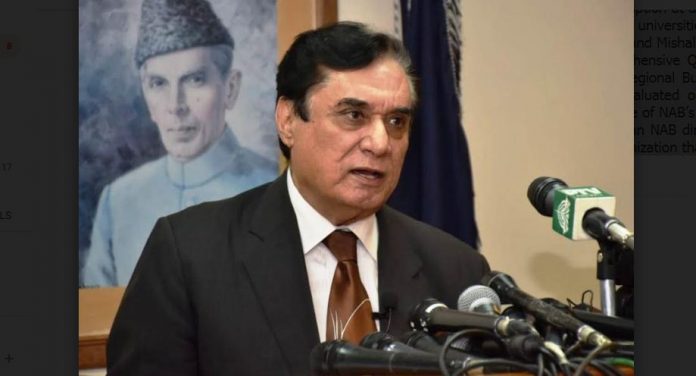 ISLAMABAD, FEB 7 (DNA) – Justice (RETD) Javed Iqbal Chairman NAB has said that mega corruption cases against big fish should not be kept in files and these should be taken to logical conclusion as per law.

Chairman NAB directed all regional bureaus of NAB that all mega corruption cases against big fish should be taken to logical conclusion within the prescribed time frame so that references should be filed in accountability courts to bring the corrupt elements to justice and in order to recover looted money and deposit in the national exchequer considering its our national duty as per law.

He said that all inquiries, complaints and investigations would be completed on merit and transparency and based on solid evidence and documentary proofs. We have to strictly follow the policy and necessary measures would be taken against all those who are involved in corruption through pursuing policy of Zero Tolerance, transparency and merit as per law.

The Chairman NAB directed the officers to work with due diligence and honesty.  He said that NAB is one of the best anti corruption organizations as compared to other organizations.

He directed the concerned DGs to submit the latest report of all mega corrupt corruption cases as well as cases of illegal housing societies within one month so that progress on ongoing cases would be reviewed.

Honorable Mr. Justice Javed Iqbal Chairman NAB has said that NAB is absolutely committed to eradicate corruption through effective National Anti-Corruption Strategy. He said that comparative figures for the last three years are indicative of NAB’s excellent performance. He said that 59 percent people have shown confidence in NAB as per the report of Gillani and Gallup Survey.

He said that NAB had filed 1230 corruption references in respected Accountability Courts which are under trial in the respected Accountability Courts having worth of Rs. 947 billion. He said that NAB has established a state of the art Forensic Science LAB in NAB Rawalpindi Bureau which has facilities of Digital Forensics, Questioned Documents and Fingerprint analysis which is being utilized for further improvements in the quality of inquiries and investigations in all respects.

He said that NAB has introduced a new concept of Combine Investigation Team (CIT) in order to benefit from the experience and collective wisdom of senior supervisory officers, a system of CIT consisting of Director, Additional Director, Investigation Officer and a Senior Legal Counsel has been put in place. This is not only lending quality to the work but also ensuring that no single individual can influence the official proceedings of NAB. He said that NAB has signed MOU with China to oversee CPEC projects being conducted in Pakistan.

He said that youth is our future; NAB has signed an MOU with the Higher Education Commission in order to aware youth about the ill effects of corruption at an early age. More than 50 thousands Character Building Societies have been established in colleges and universities of the country. He said that Transparency International (TI) Pakistan, World Economic forum PILDAT and Mishal have appreciated NAB’s efforts in eradication of corruption.

He said that NAB has devised a comprehensive Quantified Grading System in order to further improve the performance of NAB Headquarter and all Regional Bureaus. Under the Quantified Grading System, NAB Headquarter and Regional Bureau’s are being evaluated on an annual and midterm basis at a given criteria which has proved very successful and the performance of NAB’s Regional Bureaus is being increased day by day due to regular monitoring and inspection. The Chairman NAB directed all regional bureaus of NAB to ensure self respect of every person as NAB is a people friendly organization that believes in zero corruption and 100 percent development.=DNA