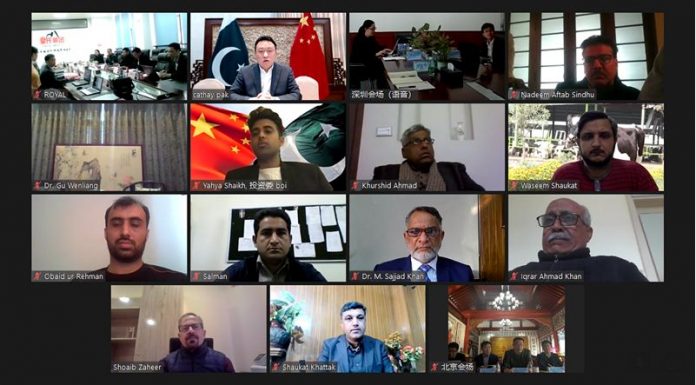 BEIJING, Feb. 6 (DNA): The first business matchmaking event between Chinese and Pakistani enterprises in the Buffalo industry was held by the Pakistan-China Agriculture Cooperation Information Platform, that was established last month aiming to break information barriers between agricultural enterprises of the both sides and enhance pragmatic cooperation.

According to China Economic Net (CEN), gathering representatives from Chinese and Pakistani leading companies and institutes engaging in the Buffalo industry, the virtual meeting has discussed the feasibility of technological cooperation in developing Buffalo embryos to create high-yield type of Buffalo and the possibility of business cooperation in the production of Buffalo milk, powder, meat and other value-added products that could shore up Pakistan’s export.

“Can we import buffaloes from Pakistan?” That’s the first question asked by Lu Yangqing, Deputy Dean of College of Animal Science and Technology, Guangxi University.

A Chinese expert in diary Wang Dingmian once introduced in a report that the milk production of domestic dairy cow in China is relatively low, with an annual output of about 600 to 800 kg per cow, while the annual milk production of Pakistan’s Neeli-Ravi buffalo is about 1.5 tons per one.

As early as 1974, 50 Pakistani Neeli-Ravi buffaloes were introduced to China, but the milk production decreased with the passage of time and no more were imported since then. In this condition, Chinese companies expect to import more improved types of buffaloes from Pakistan.

However, according to the Pakistani government’s policy, “it’s not allowed to export live animals,” noted Dr. Khurshid Ahmad from Animal husbandry commissioner of Ministry of National Food Security and Research.

“If that’s not viable, we can develop buffaloes embryos,” Lu Yangqing suggested. “We have a lot of recipient buffaloes that are all swamp type buffaloes. So we can import embryos of indigenous types like Neeli Ravi or Hula Buffalo embryos into China and then transfer to our recipients.”

Responding the suggestion, Dr. Farooq Sandhu from Al Haiwan Semen Company, Sahiwal, said, “Pakistan’s buffalo industry is in urgent need to extend its industrial chain to realize added value growth, and we hope Chinese counterparts can support us in technologies and manufacturing.”

According to Dr. Farooq’s introduction, Al Haiwan Semen Company has six years of experiences in developing cow embryos, and with the technological assistance from the Chinese company, Al Haiwan Semen may be capable of conducting experiments in Buffalo embryos and breeding better types.

“We are keen to invest in Pakistan, setting up a lab to jointly develop Buffalo embryos or having join ventures with Pakistani counterparts to produce Buffalo milk and powder for export.

He added that there is already a mature business model in the camel milk and powder industry between enterprises from China and East-Asia that could lead the way forward.

“We will send a delegation to Pakistan in the following months to carry out investigations and seek for potential partners,” Huang hinted.

If the company decides to make a huge investment in Pakistan to support the whole supply chain of China’s buffalo milk business, it will undoubtedly bring enormous economic benefits to the country.

Dr. Sajjad Khan, Vice Chancellor of Cholistan University of Veterinary & Animal Sciences suggested research institutes and associations in the Buffalo industry should be considered if there were to be cooperation between Chinese and Pakistani enterprises.

All guests thanked the Information Platform for organizing the business matchmaking to bridge information gap between the enterprises of two countries.

Following the buffalo industry cooperation and matchmaking event, the platform will carry out a series of online discussion and exchange activities this year.