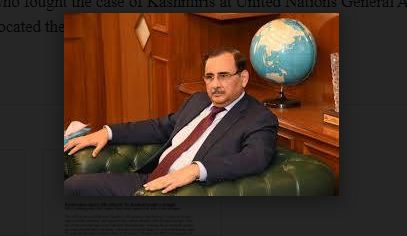 KARACHI, FEB 5 (DNA) – The of Federation of Pakistan Chambers of Commerce and Industry’s ruling group has expressed full solidarity and support to the valiant struggle of the Kashmiri people, who have been resisting repression with their determination, warning the government against any kind of trade talks with India, which has crossed all limits to violate the human rights.

To mark the Kashmir Solidarity Day on February 5 (Friday), the FPCCI ruling party of BMP Chairman Mian Anjum Nisar expressed his full support to the just struggle of Kashmiri people for their right to self-determination under the UN resolutions.

Mian Anjum Nisar, expressing complete solidarity with the peaceful Kashmiris, said the entire business community was fully supporting them and their cause of independence. He suggested the government to think strategically, not emotionally on trade issues with India. He further said that the global economy is in recession and bilateral trade is diminishing, however, in Pakistan’s case the scenario is worse as its imports are increasing more than exports.

He urged the government and all stakeholders to formulate a coherent national strategy and national stamina to sustain that strategy. He said that civilian and military leaders are on the same page on Kashmir issue, people are protesting Indian move inside India, in the UK and other countries.

He said India is facing unprecedented diplomatic humiliation which is a victory for Pakistan. He noted that Modi’s all nefarious moves have initiated the process of disintegration of a divided country while tensions with Pakistan will destroy its economy and credibility. He warned that depriving Pakistan of its share of water will be the last mistake of Hindu radicals who have changed secular India into an extremist state.

Traders’ leader also expressed appreciation to all other Parliamentarians, Civil Society, Intelligentsia, Media, Human Rights organizations, all over the world, who support the just and heroic struggle of the oppressed people of Occupied Jammu and Kashmir.

The business community will continue to provide with every kind of support to the Kashmiri people and will not leave them alone in their struggle, he added. He said that Pakistan will extend every kind of support to the people of Jammu and Kashmir at every forum, reiterating that the Kashmiris would continue their struggle till the achievement of the goal of freedom.

Anjum Nisar condemned the illegal annexation of Occupied Kashmir by India, led by Narendera Modi and the RSS gang he represents, with the aim to change the demography of Occupied Jammu and Kashmir as part of their fascist and racist agenda.

The FPCCI’s Businessmen Panel (BMP) also passed a resolution saying: “This annexation is an attempt to undermine the United Nations Charter, International Law and relevant UN Security Council Resolutions which seek the inalienable right of self-determination for the people of Occupied Jammu and Kashmir. In pursuance of his fascist and racist agenda which is inspired by Nazi Germany, since this fascist mindset and practices are similar, the regime of Narendera Modi is committing another grave crime against humanity by turning occupied Kashmir into the world’s biggest and most brutal concentration camp, with imposing curfew and it’s completed lock-down, closing of all communications, with thousands Kashmiris arrested, kidnapped, maimed or martyred or raped.”

Mian Anjum Nisar also welcomed the UN Security Council and the UN Secretary General of commitment to UNSC Resolutions on Kashmir. “We would also like to express appreciation of the positions taken by our friends like China, Turkey and Iran, whose governments have also announced their support of Kashmiri people,” he said.