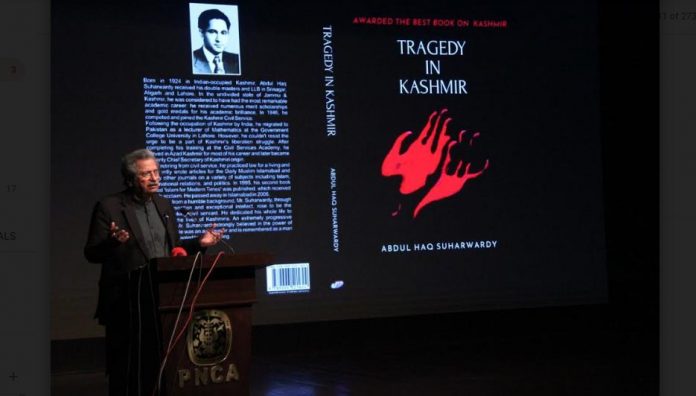 ISLAMABAD, FEB 3 (DNA) – Pakistan National Council of the Arts in collaboration with Dr. Zarqa Suharwardy Taimur hosted a book launch titled “TRAGEDY IN KASHMIR” authored by (late) ABDUL HAQ SUHARWARDY, the first and only Kashmiri origin Chief Secretary of Azad Kashmir after partition. The author has comprehensively covered the struggle for freedom by Kashmiri Muslims despite the atrocities put forward before the partition.

The book also covers the narrative of the foul play and sinful plot of Nehru family and the British raj that made the heavenly valleys of Kashmir into a living hell for their true citizens. The story of how Muslim majority districts of Gurdaspur and Batala were given to India to establish a road connection to India.

The tragedy of Kashmiri leadership, Sheikh Abdullah whose lack of foresight ended up in the debacle of the Indian Occupation of Kashmir. Finally, the heroic struggle of the tribal people and Poonchi exarmy servicemen who were successful in liberating what we now know as Azad Jammu and Kashmir, including Gilgit and Baltistan.

The book traces how the Kashmiris, a race of strong fighters in the days of Sultan Shahabuddin, changed over 200 years of Sikh oppression and subjugation. Yet they rose up against Dogra Raj in 1930 and were able to develop an indigenous political movement.

The development of the Muslim Conference and later its division into the National conference led by Sheikh Abdullah and a Muslim conference which was a popular party but lacked a recognizable public leader. How Mr Nehru identified Mr Abdullah and developed a strong relationship with him, showering him with favors to induce him to support accession to India. It details the background intrigues involving the Radcliffe commission, the British government in India with Indian leaders to pave the way of accession to India by subterfuge and clever manoeuvring.

The chief guests for that ceremony were Mr. Shafqat Mehmood, Federal Minister for Education & National History & Culture Division., Senator Walid Iqbal, Chairperson of the Senate Committee for Defence along with DG, PNCA, Dr. Fouzia Saeed. Renowned anchor and media person Mr Ahmed Qureshi hosted the book launch followed by the presentations of Dr Zarqa Suharwardy who briefly demonstrated the essence of book and role of todays youth towards Kashmir Cause.

Mr. Shafqat Mehmood, Federal Minister for Education & National History & Culture Division in his remarks stated that this is a very important time in the history of Kashmir and this book on the bases of content and ideology is most relevant and resonates to the current situation. He appreciated the efforts of Dr Zarqa and DG PNCA for making this event happen.

Senator Waleed Iqbal enlightened the sacrifices of Kashmiri people and suggested a way forward under the vision of Dr Allama Iqbal.DG PNCA Dr Fouzia Saeed gave a brief insights on PNCA activities on Kashmir Solidarity Day and shared her thoughts on the extra ordinary efforts by Dr Zarqa in these critical times. Other speakers of that evening were Mr. Farhan Bukhari, International Journalist and Ghulam Safi, Convener Tehreek-e-Hurriyat Jammu Kashmir (THJK) Host Mr Ahmed Qureshi concluded the session and showed his gratitude towards distinguished chief guests, speakers and the worthy participants for making that launch successful.=DNA