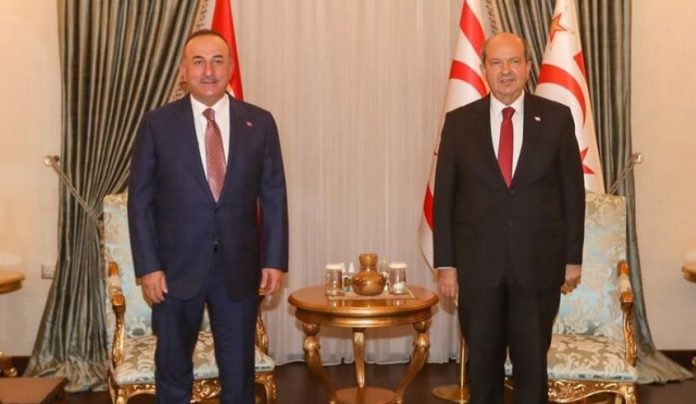 ISTANBUL – The Turkish foreign minister on Tuesday stressed the importance of negotiations based on sovereign equality to resolve the Cyprus issue.

Negotiation on sovereign equality is required in resolving the Cyprus issue, “if there is sovereign equality, then there can be two states,” Mevlut Cavusoglu told a joint news conference with Turkish Republic of Northern Cyprus (TRNC) President Ersin Tatar in Lefkosa.

Stressing the UN’s efforts after Turkey’s proposal of an informal 5+1 meeting, Cavusoglu said: “Because the negotiations we conducted in Crans Montana [talks of 2017] for a federation have failed.”

Cavusoglu noted that the search for a solution on the Cyprus issue for 52 years has been unsuccessful due to the attitude of the Greek Cypriot side, which “does not want to share anything with the Turkish Cypriot people and with the TRNC”.

“There are already two communities on the island of Cyprus, two peoples, two states,” he added.

“So there is a de facto situation whether they recognize it or not. This needs to be formalized.”

Pointing out negotiations through diplomacy for a permanent solution on the island, Cavusoglu said: “Since we have negotiated on something else during the talks so far, we have not come to a conclusion.”

The meeting will be informal without pre-conditions to allow the parties to see that there is a change in administration in Northern Cyprus, Guterres said during his first news conference in 2021.

On the tension over the Eastern Mediterranean, Cavusoglu said that half of the issue would be solved if they can find a solution for sharing revenues of natural resources in Cyprus.

Cavusoglu added that the Greek Cypriot side does not want to share the revenues of hydrocarbon resources in the region.

He recalled that Turkey proposed the EU a multilateral conference on the Eastern Mediterranean.

Cavusoglu stressed that the meeting should be attended by the two sides or on a separate platform. “In other words, either both parties can participate or neither of them.”

He underlined that Turkey prefers “both parties to participate and find a solution for fair sharing.”

For his part, Tatar said Turkey’s position of being 100% in consensus with the TRNC on the Cyprus issue gives them strength.

Works continue for the unofficial conference on Cyprus, to be organized under the UN leadership in March, added Tatar.

On Monday, Cavusoglu met with Turkish Cypriot authorities as part of a two-day visit.

He was first received by TRNC Parliament Speaker Onder Sennaroglu and later by Prime Minister Ersan Saner to discuss issues on “the common agenda, particularly the Cyprus issue”.

The island of Cyprus has been divided into the TRNC in the north and the Greek Cypriot administration in the south since 1974, when a Greek Cypriot coup aimed at Greece’s annexation of the island was followed by violence against the island’s Turks and Ankara’s intervention as a guarantor power.

It has seen an on-and-off peace process in recent years, including a failed 2017 initiative in Switzerland under the auspices of guarantor countries Turkey, Greece, and the UK. The TRNC was founded in 1983.

Turkey has recently stressed that efforts for a “federal” solution to the divided island of Cyprus have proved hopeless and any future talks must focus on two separate, sovereign states on the island.