ISLAMABAD, DEC 22 (DNA) Uzbek nationals living in Pakistan cast their votes in parliamentary and local govt elections at polling stations established at the Embassy of Uzbekistan in Islamabad.

Ambassador of Uzbekistan Furqat Sidikov and other embassy staff also cast their votes.

The polling started from 8 a.m and voting process began with the participation of citizens of Uzbek republic permanently residing in Pakistan.

In the 22nd polling station, created at the Embassy, active participation of citizens of Uzbekistan in exercise of their constitutional rights has been shown.

In particular, citizens showed great interest in the voting process itself and the programs of 5 candidates from 5 political parties of Uzbekistan. 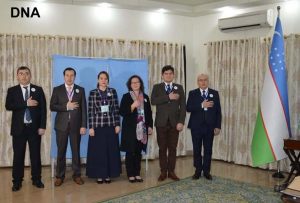 As a sign of the exercise of their constitutional rights, the citizens of Uzbekistan were provided with symbolic badges specially prepared by the Embassy with the inscription “New Uzbekistan – new elections”. This badge was handed over to each voting participant, as well as to members of their family.

Especially for citizens of Uzbekistan, the embassy organized a festive pilaf, including other dishes of national cuisine (samsa, manti, shurpa, sweets). The Uzbek citizens appreciated the arrangements made by the Embassy for them.

They said they felt indebted to the Embassy staff and officials for proving them with an opportunity of exercising their fundamental right of voting. 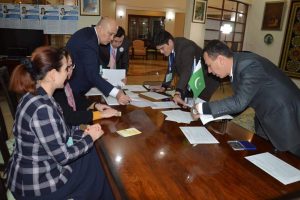 The citizens who visited the Embassy to vote with their children, a modern playground was organized with various outdoor objects of entertainment, which was greatly liked especially by the children. DNA