BAKU (DNA) – A book titled “Religious Tourism Destinations in Azerbaijan” by an employee of the State Committee for Work with Religious Organizations of the Republic of Azerbaijan Bahruz Orujov, has been published.The book provides detailed information about the temples of various religious confessions, which existed in Azerbaijan since ancient times and are considered to be the magnificent pearls of the spiritual and cultural heritage of the country. 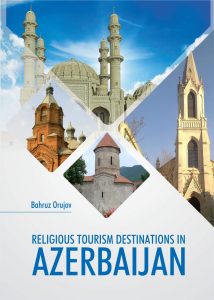 The first pages of the book give a brief overview of the history of the Azerbaijan Democratic Republic, the first parliamentary republic in the Muslim East, the purpose of the book, and the religious landscape in the country. The book features the addresses of 51 ancient and modern religious places of worship, located in 8 regions of Azerbaijan, illumination about their history, architectural features, as well as traditions, and national and religious values of religious and ethnic groups in Azerbaijan. The book, which contains remarkable events and facts pertaining to Azerbaijan, also contains photographs of sacred sites.

This first edition of religious tourism is intended for those who are interested in relevant fields, people working, studying, guiding in religion and tourism sphere, working independently in internal and external audiences, as well as for a wide range of readers interested in learning the religious tourism potential of Azerbaijan. The book can also be used as a reference book for religious tours and visits throughout the country.

Dedicated to the 100th anniversary of Azerbaijan Republic, the book was published with the financial support of the Moral Values Promotion Foundation under the State Committee for Work with Religious Organizations.=DNA

LINK OF THE BOOK