On the westernmost tip of the Island of Flores, the town of Labuan Bajo, or also spelled Labuhan Bajo, sits peacefully with many wonders waiting for you to explore. Labuan Bajo was only a small fishing site that today has flourished to become the gateway to many exotic destinations in East Nusa Tenggara. Its population is around 2.5 million people. Around 60000 people are living in Labuan Bajo. The main source of income of people of the island happens to be tourism; fishing while a small number of public sector jobs are also available. 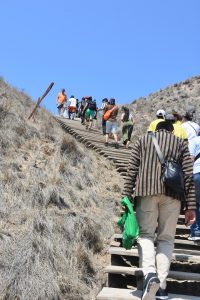 People on the island are benign, hospitable and easy to get along with. Their kind nature makes stay of tourists even more pleasant. The FAMTRIP 2019 landed at the island on October 20 to explore potential of the island. For most of us it was for the first time in this part of the world. Because of its mesmerizing scenic beauty; blue sea and underwater treasures tourists fell immediately in love with this place. On a lighter note, one of our colleagues even wished to have his tomb built at top the mountain right in the middle of the sea in the Padar Island as he wanted to have a peaceful eternal life!! 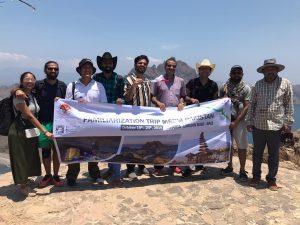 Labuan Bajo is known as the city of sunset. You can find plenty of vantage point to enjoy every end of the day with a spectacular sky. From Labuan Bajo you can enjoy a half-day, full-day or even an overnight trip to one of the pristine islands nearby. You may spend the night on one of these islands in a bungalow that is just footsteps away from the crystal clear water. The surrounding reef belongs to the world’s greatest dive sites and also offers perfect snorkeling.

Our first stop was Paddar island, which is around three hours away from Labuan Bajo if you take wooden boat. Since it is big boat therefore it takes longer than the speed boat. However it is cost effective as compared with the speed boat and secondly it is quite suitable for the big groups like ours. The boat was extremely comfortable. Usually we come across such boats only in Hollywood movies. 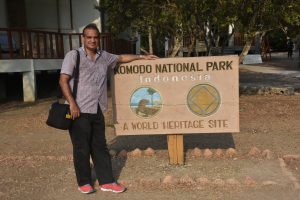 Padar island is famous for its trekking track that goes up to the top of the hill. The tourists normally have to cover a steep distance of about 8,00 meters. The track is arduous and in zigzag therefore most of the tourists give up ascend even in the half way. Most of our group members nevertheless successfully scaled the peak. Flow of tourists to this island has increased manifold during past few years, told the Director of the tourism department Labuan Bajo Shana Fatina. She further told that the Tourism Ministry was doing its best to facilitate tourists in a befitting manner by providing them all possible facilities.

Our next destination was Pink Beach, which is haven for surfers and snorkeling. But the Komodo island perhaps is the most sought-after tourist destination in the area.  The extraordinary interest of travelers to the existence of the Komodo dragons who are locally called ora is a valuable alluring factor that amplified by its superb national park. The Komodo National Park was listed as UNESCO’s World Heritage Site in 1991. It is home to fascinating wildlife, both on land and underwater. 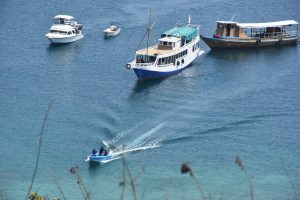 For most of FAMTRIP participants it was quite fascinating experience to see the big lizards called Komodo dragon from an arm’s length. The habitat at the Park is properly persevered and maintained. The trip of this island remains incomplete without a visit to the Komodo Island. From Pink Beach it took us almost two hours to reach the Komodo Island. Padar Island comprised beaches and trekking facilities therefore nobody is living on this Island. Same is the case with Pink Beach area. People working on these Island such as guides; staff of the local tourism department and security personnel in fact live at the Komodo Island. Every day early in the morning they travel to these islands to facilitate tourists and then come back in the evening.