Indonesia’s annual (34th) mega trade and investment expo Trade Expo Indonesia 2019 (TEI) opened here with huge participation of businessmen from Pakistan and attracting the buyers and tourists not only from within the country but also from across the world thus generating new possibilities of growth and promotion of Indonesian products in the world markets.Ambassador of Indonesia Iwan S Amri welcomed the Pakistani delegation in Indonesia. FAHAD Waheed from Islamabad received prestigious  award of outstanding businessman from Pakistan and for promoting Pakistan-Indonesia business relations. Ambassador Amri later at a dinner hosted for Pak delegation handed over award to Fahad. 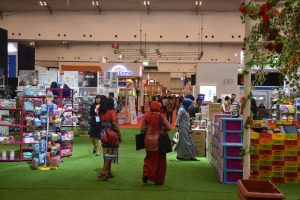 The theme of this year’s expo is “Moving Forward to Serve the World.” While addressing on the occasion Vice President Jusuf Kalla said Indonesia is going to be the new world destination of trade and investment centre. He congratulated the stall holders who had come all around the country to showcase their products that according to the visitors “are no less in quality or durability than the dominating markets of the world.

A delegation of eminent businessmen and traders of Pakistan in the leadership of the President of Gujrat Chamber of Commerce & Industries Amir Nauman is also participating in the expo.

One could see at the expo thousands of visitors, both national and foreigners, visiting the stalls and taking interest in a variety of products from organic food to furniture, digital devices to traditional medicines put on display in the ten spacious halls of the Indonesia Convention Centre where this exhibition is taking place. 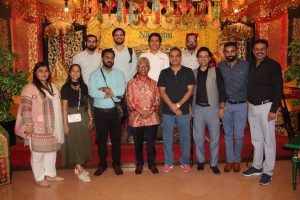 According to the organizers, the international trade exhibition organized by the Ministry of Trade is a venue for business meetings to increase domestic exports with a transaction target exceeding last year’s achievement of US$84 billion.

While speaking on the occasion Trade Minister of Indonesia, Enggartiasto Lukita said his government has set the target of concluding 12 trade agreements, including eight with non-traditional markets in 2020, as part of its strategy to boost exports.

“The non-traditional markets include Eurasia, Bangladesh and some African countries,” he said adding the eight export destination countries and regions outside the main markets for Indonesian exports are Morocco, Bangladesh, Tunisia, Turkey, Djibouti, Pakistan, Iran and the Eurasian countries.

Ambassador of Indonesia to Pakistan Iwan S Amri while talking to media said ever since his posting in Pakistan his main thrust was on promoting bilateral links in all fields especially people to people contacts. He added trade volume between the two countries had reached  3.1 billion dollars. He hoped to further boost this cooperation in the days to come.

The president Gujrat Chamber in his speech termed the expo a great success. He thanked the Indonesian embassy for providing them with an opportunity of attending the mega event and interacting with their Indonesian counterparts.

He particularly  lauded role of the ambassador and embassy officials in promoting bilateral relations. He said they were just amazed to see potential of Indonesia in vatious fields adding Pakistan could benefit from Indonesian expertise.