ISLAMABAD, SEPT 18 (DNA)- Embassy of Brazil in collaboration with Islamabad Marriott Hotel organized National Day of Brazil featuring traditional Brazilian Tango dances; mouth- watering cuisines plus screening of spell-binding documentaries about various landscapes of Brazil.The Marque Hall was decorated in a way to give the guests a feel of Brazil as a country and its rich cultural and historical background. 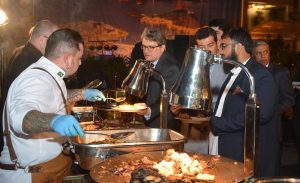 Chief guest Federal Minister for Professional Education and Training Shafqat Mahmood was all praise for the hosts for hosting the National Day reception in such a wonderful manner.

The minister praised role of Ambassador Claudio Lins for promotion of bilateral relations between the two countries.

The minister, greatly enchanted by picturesque landscape of Brazil, wished to visit the country at soon as possible. “It was a pity that I have not been able to visit this marvelous country so far”, he told the audience.

Earlier, Ambassador of Brazil Claudio Lins in his remarks highlighted role of education ministry in promotion of education in Pakistan.

The ambassador especially dilated upon various initiatives launched by the education ministry in this regard under the guidance of the minister. 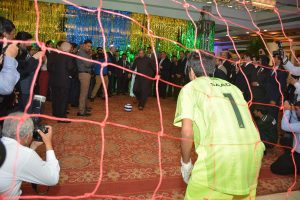 The guests later enjoyed traditional Brazilian cuisines. Guests could not resist themselves to be part of the Tango dance performance when Brazilian artists came on the floor to exhibit their skills.

The minister and other guests also took part in a football penalty shoot-out competition. Guests had one chance to shoot at the goal and win a football as a gift after scoring a goal. The Minister however was given two chances but even then he could not score a goal.

Meanwhile the Brazil food festival also kicked started at Islamabad Marriott Hotel on Wednesday which would continue for three days.=DNA