SHENZHEN,  — The Shenzhen Bay Sports Center rises along the shore with the green hills of Hong Kong visible across the water. It normally bustles with a variety of youth sports programs and dance, art and language academies, including one that advertises a “Hong Kong Style Education.”In recent days, however, it has become a staging ground for olive-green military transports and armored personnel carriers that arrived on Aug. 11 and disgorged hundreds of security officers from the People’s Armed Police, a Chinese paramilitary force, who are loudly running through daily exercises and drills.By massing the troops within view of Hong Kong, the semiautonomous territory convulsed by protests, China’s Communist Party is delivering a strong warning that the use of force remains an option for Beijing. It is also a stark reminder that military power remains a bedrock of the party’s legitimacy.

“It’s a credible threat,” Minxin Pei, a professor at Claremont McKenna College in California, said. “The Chinese government does not want to leave any doubt that, if necessary, it will act.”

China’s leader, Xi Jinping, has governed with an increasingly iron fist, including over the military. The deployment does not appear to be the prelude to a military intervention in Hong Kong, but few analysts expressed doubt that China would act if Mr. Xi believed the country’s sovereignty over the territory was jeopardized.

“How can he regard the Hong Kong movement as a pure democratic movement?” Tian Feilong, executive director of a research institute on Hong Kong policy in Beijing, said in an interview. Mr. Xi is likely to perceive the protests not just as a call for democracy in Hong Kong, but also as an effort to topple the Communist Party itself, he said. “He is very politically alert.”

© Thomas Peter/Reuters Chinese exercises at the stadium in Shenzhen have included drills on controlling crowds.

Mr. Xi’s government, he said, has most likely completed preparations for an intervention but is holding off as long as the local authorities manage to keep the protests contained. That calculus could change, he and other analysts said, if the protests succeed in crippling the government or other institutions, like the courts, which will soon begin hearing the first cases of those arrested in the demonstrations. In what some observers see as a worrying sign, officials in Beijing have called the protesters’ actions “close to terrorism.”

The use of force, however, would be fraught with risks for Mr. Xi, who is already juggling economic headwinds and deteriorating relations with the United States under President Trump.

The country and the party are still haunted by the use of the People’s Liberation Army to crush the Tiananmen Square protest movement 30 years ago this summer, which resulted in international isolation and sanctions. A military crackdown could spell the end of Hong Kong’s role as an international financial center and the unique political formula under which Beijing grants the territory freedoms unseen on the mainland.

© Lam Yik Fei for The New York Times Fu Guohao, a reporter for a Chinese state-run newspaper, being rushed from Hong Kong’s airport last week after protesters tied him up and beat him.

“The military solution would have many urgent and disruptive effects,” said Wu Qiang, a political analyst in Beijing. “It would be political suicide for the Communist Party of China and the ‘one country, two systems’ arrangement of Hong Kong.”

More nationalistic voices have brushed aside such fretting, noting that China is a much stronger and diplomatically confident nation than the one that endured international opprobrium after the Tiananmen crackdown.

“The Hong Kong matter will not be a repeat of the political disturbance of 1989,” Global Times, a Communist Party newspaper, wrote Friday in an editorial, referring to the year that military troops in Beijing crushed the Tiananmen protests. It said Beijing had not decided to use force to intervene in Hong Kong, but had the legal right to do so if needed.

© Lam Yik Fei for The New York Times Tens of thousands of protesters marched Sunday in Hong Kong despite a downpour, defying a police ban on extending the rally beyond Victoria Park.

“Washington will not be able to intimidate China by using the turmoil 30 years ago. China is much stronger and more mature, and its ability to manage complex situations has been greatly enhanced,” the editorial said.

The deployment in Shenzhen was clearly meant to focus attention in Hong Kong and beyond. A white bridge that connects Shenzhen to Hong Kong is only two miles down the road.

The message was amplified by no less than Mr. Trump, who disclosed on Twitter that American intelligence agencies had spotted the Chinese troops massing at the border. “Everyone should be calm and safe!”

It remains to be seen how effective Beijing’s posturing will be. The authorities have from the start misjudged the depth of the anger driving people into the streets. While the deployment and increasingly blunt warnings from officials have rattled nerves, they seem to have had little impact on those who view the struggle as one crucial for preserving Hong Kong’s freedoms.

© Ng Han Guan/Associated Press The deployment in Shenzhen of the People’s Armed Police, a paramilitary force, showed that China has options other than its army in seeking to maintain order.

The growing threats of military action came as violent clashes have escalated. Public anger on the mainland spiked last week when protesters at Hong Kong International Airport tied up and beat two men from China.

Three days after protesters defaced the central government’s liaison office in Hong Kong with paint and graffiti on July 21, the chief spokesman of the Ministry of National Defense curtly noted that the People’s Liberation Army had the authority to intervene in the territory, if requested, to keep order.

The law that details relations between Hong Kong and the army limits its role to external defense, but allows it to intervene, when sought by Hong Kong’s leaders, to maintain public order or assist in cases of natural disasters.

The Hong Kong garrison of the People’s Liberation Army is based in what was formerly the British military headquarters. The garrison includes 19 sites around the territory, but many of its soldiers — estimates of the total vary from 6,000 to 10,000 — live and train in bases across the border in Shenzhen.

“Those who want to stir up unrest should know that Hong Kong has a P.L.A. garrison,” Han Dayuan, a law professor at Renmin University in Beijing, said during a government-organized news conference. “They should consider that for a moment when there is turmoil, there is also a need to resolve it quickly.”

The deployment of the People’s Armed Police, though, shows Beijing has options other than the army. The armed police force has a mission of maintaining internal security on the mainland, including responding to terrorist attacks, riots and rebellions.

It was founded in 1982 and has 1.5 million members, making it bigger than most militaries in the world. It has in recent years been deployed extensively in Xinjiang, where the government has harshly cracked down on what it views as the threat of Islamist extremism among Uighur Muslims.

As part of Mr. Xi’s efforts to streamline the military command structure, a core part of his consolidation of power since 2012, the People’s Armed Police was put last year under the leadership of civilian party authorities and the Central Military Commission, which he controls as its chairman.

Video of its deployment in Shenzhen appeared in China’s state media within hours of the arrival of the vehicles at the stadium on Aug. 11. The reports said the troops there were taking part in a drill across all of Guangdong Province.

The troops at the stadium appear to have settled in on its grounds. Backpacks and other personnel items could be seen neatly arrayed in the stadium’s causeways, while officers milled about during breaks from drills, which could easily be heard, if not seen, from the streets around the stadium.

One officer, when asked, said the deployment was a summer training exercise.

There appeared to be little effort to disguise the activity. The People’s Daily posted a video late Saturday showing the force in Shenzhen standing in formation and conducting mock clashes with protesters wielding sticks. One officer with a megaphone warned in Cantonese, the dialect spoken in Hong Kong: “Stop the violence, repent and be saved.”

Police and armed police forces held a joint training in Shenzhen, Guangdong Province, which is adjacent to Hong Kong, on Saturday 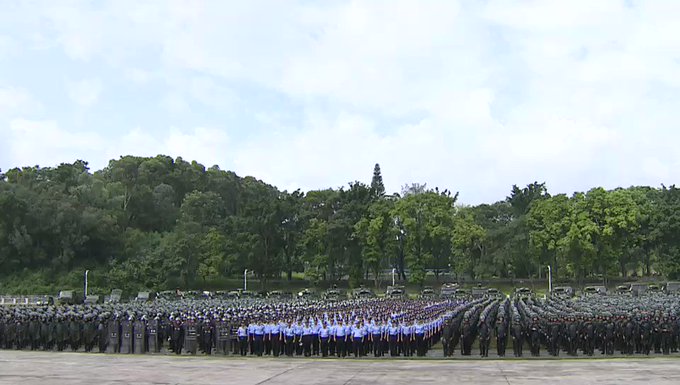 171 people are talking about this

The exercises do not seem to have resonated in Hong Kong, suggesting that Beijing’s messaging could be falling short.

For now, analysts said, officials in Beijing appear willing to watch and wait, continuing to offer support for Hong Kong’s beleaguered leaders, to dangle carrots and sticks at business and cultural leaders, and to try to undermine public support for the protests. Giving in to the protesters’ demands would be an unacceptable sign of weakness for them.

Mr. Wu, the analyst in Beijing, said the government’s overriding goal now was “to prevent Hong Kong’s movement from spreading to the Chinese mainland.”

That effort at least appears to be succeeding here in Shenzhen, a factory town that kicked off China’s remarkable economic transition 40 years ago and that now has aspirations of being a global high-tech hub.

Two rivers and Shenzhen Bay separate the city from Hong Kong. So does a heavily fortified border with passport and customs checks at six crossing points. There is also a cultural and political gulf that has barely narrowed since Hong Kong was returned to Chinese control in 1997.

Shenzhen does not feel like a city mobilized for military action. Several people, when asked, said they had heard little of the protests, or declined to discuss them.

Others expressed support for Hong Kong’s police. Cathy Huang, who is 23 and works for an insurance company, said mainlanders attached “more importance to the police” than people in Hong Kong did.

“It is not that it cannot be solved by force,” she said in a shopping center a short drive from one of the border crossings. Her view starkly contrasted with that of many of Hong Kong’s protesters about excessive use of force, which has now become one of the complaints driving still more protests.

“It depends on the attitude,” she said. “To a certain extent, we would even support the police adopting slightly harsher measures.”

Steven Lee Myers is a veteran diplomatic and national security correspondent, now based in the Beijing bureau. He joined The New York Times in 1989, and has previously worked in Moscow, Baghdad and Washington.

Javier C. Hernández has been a China correspondent in Beijing since 2014. He joined The New York Times in 2008 and previously covered education and politics.

COURTESY BY THE NEW YORK TIMES.