ISLAMABAD, JUL 19 (DNA) – Kuninori Matsuda, Ambassador of Japan to Pakistan, welcomed the President of Pakistan Olympic Association (POA), Lt Gen (R) Syed Arif Hasan.Ambassador Matsuda said that it was just one year prior to the Tokyo Olympic and Paralympic Games in 2020 and that the President’s visit was very timely.Ambassador Matsuda also said, “I am looking forward to seeing Pakistan athletes being qualified for the 2020 Tokyo Games in coming months, and I would like to cooperate with Lt Gen (R) Hasan to promote further people-to-people interactions between Japan and Pakistan.” 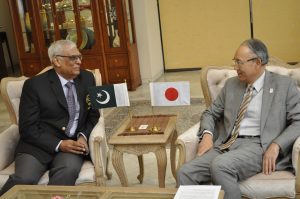 Ambassador Matsuda and Lt Gen (R) Hasan agreed with the importance of interactions between Pakistan athletes in the 2020 Tokyo Games and Japanese people hosting the national event including the Host Town system in Japan.

Ambassador Matsuda and Lt Gen (R) Hasan also affirmed the importance of roles of sports in diplomacy and business areas.

Ambassador Matsuda stated that Japan would continue providing all possible assistance to Pakistan in the field of sports and to relevant industries in Pakistan, and informed the POA President that a good number of tatami mats and judo costumes would be presented to the Pakistan Judo federation early next year, on behalf of the Japan Judo Federation.

Ambassador Matsuda emphasized the need of sports in the youth education as sports have life time effects on the health of youth.