ISLAMABAD, JUL 6 (DNA) – Ambassador of Romania Nicolae Goia has said Romania’s Presidency of the European Council has been a successful office, in which Romania proved to be strongly attached to European values and has acted to strengthen the European project, for a Union of the citizens, liberties, our efforts and our combined capacities.

He expressed these views while speaking on the occasion of a reception he hosted to mark the end of the Presidency and to bid farewell to the Ambassador of European Union.

He recognized services of the outgoing ambassador of European Union Jean Francois Cautain for promotion of EU-Pakistan relations. Ambassador of Goia said during tenure of Ambassador Cautain relations between EU countries and Pakistan touched new heights. 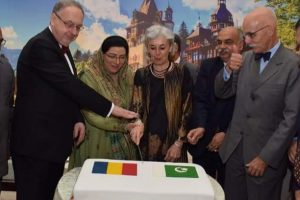 Ambassador Goia further said in the 6 months of Romanian term we have proved promptitude, efficiency and professionalism, given that Romania’s presidency of the Council of the EU took place in a complex and dynamic context, marked by the European elections, as well as the developments related to Brexit, by an ever changing international environment.

He said the presidency of the Council of the EU has had a great symbolic value for Romania and Romanians can be proud of results achieved during these six months.

Ambassador Goia further said Romania has an important say in the European project, our country being the first state in that capacity to present its priorities in the plenary of the European Economic Council.

He said about 2500 meetings and events, of which over 2000 meetings of the working groups, 64 EU council ministerial meetings a total of 300 evens organized in Romania as well as the hosting of the Sibiu Summit.

“We can talk about a record review; 90 legislative files closed in record time. We have campaigned of the equal observance of the rights and freedoms of all citizens, for the promotion of Romania’s interests and for the establishment of dialogue as the main decision-making instrument”.

He said they have had good consultations with the European leaders on the files on the EU agenda and on the priorities as a member state.

The ambassador said “while my country is handing over the presidency to Finland, I am fully confident that Helsinki will have a successful mandate and under the Finish\s Presidency generous motto “ A sustainable Europe, a sustainable future”, the European project will further advance”, he added.=DNA