ISLAMABAD, JUNE 11 (DNA) – Ambassador of Azerbaijan Ali Alizada has expressed gratitude to Pakistani Government and people for continued cooperation, support and interest to further expand and strengthen bilateral relations adding  celebration of  Azerbaijan National Day and 100th Anniversary of Azerbaijan Diplomacy in Pakistan was  a clear manifestation of strong brotherly bonds between the two countries.

Ambassador Alizada made these remarks while speaking on the occasion of National Day and 100th anniversary of Azerbaijan diplomacy. A large number of guest hailing from various walks of life attended the recepion.

Federal Minister for Railways Sheikh Rasheed Ahmed was the chief guest while many MPs also attended the event. 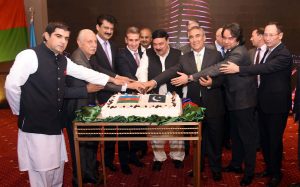 Sheikh Rasheed Ahmed also spoke on the occasion and hoped relations between the two countreis will become even strong in the coming days.

He assured Pakistan will continue its wholehearted support to Azerbaiajn on the issue of Nagorno-Karabakh.

Ambassador Ali Alizada furtehr said  “ I congratulate all my countrymen on the occassion of National Day and all employees of our diplomatic service of Azerbaijan on 100th Anniversary of Azerbaijan diplomacy and want to reiterate that, as the successor of Azerbaijan Democratic Republic the modern, emerging, stable, prosper and peaceful Azerbaijan remain committed to further strengthen and deepen relations with brotherly Pakistan”.

While giving a historial perspective the Ambassador said, 101 years ago, for the first time, on the date of May 28, 1918 a democratic republic was established in the Muslim East in Azerbaijan.

The establishment of a democratic republic for the first time in this region was a great achievement of the Azerbaijani people and its sovereign territory was 114,000 square kilometers.

He said on July 9, 1919, Azerbaijan Democratic Republic established its first Ministry of Foreign Affairs, which marks this year its centenary – 100th Anniversary of its historical creation.

Today, Azerbaijan under the leadership of President Ilham Aliyev is one of the rapidly developing countries of the world and continues its dynamic progress. Over the past 15 years, Azerbaijan’s economy has grown by 300%.

Poverty and unemployment have been sharply diminished, with measures of both now standing under 5%. Azerbaijan has a very low foreign debt around 17 percent of our GDP and our reserves are bigger than foreign debt five times. In the Doing Business 2019 report, Azerbaijan climbed 32 spots and ranked 25th among 190 countries. This is one of the most successful and greatest achievements in the history of the Doing Business rating.

Azerbaijan has also gained great achievements in the foreign policy field over the past years and strengthening the relations with Pakistan was always one of the main priorities of our foreign policy.

Azerbaijan is a country conducting an independent and transparent foreign policy based on its national interests, the principles of equal rights, non-interference in internal affairs, mutually beneficial cooperation and respect for the territorial integrity and sovereignty of states.

In 2011, Azerbaijan, by gaining the votes of 155 countries, was elected as a non-permanent member of UN Security Council for next two years. Azerbaijan continues it peaceful diplomacy on eleminating  the consequences of Armenia’s aggression against Azerbaijan and ensuring the territorial integrity and sovereignty of Azerbaijan within its internationally-recognized borders. Instead of engaging in goodwill negotiations, Armenia openly disrupts all attempts aimed at a peaceful settlement of the conflict.

Totally ignoring the demands of the UN Security Council and flagrantly violating international law, Armenia refuses to withdraw its troops from Azerbaijani territories.Armenia’s policy of occupation can never result in success.

The Nagorno-Karabakh region has been and is an integral part of Azerbaijan and will always be like this. International law and the relevant resolutions of the Security Council prove and demand this as well.

We are grateful to Pakistan’s stand on Nagorno-Karabakh conflict which always supported and supports fair position of Azerbaijan and condemns aggressor Armenia because of its occupation of the 20 % of internationally recognized Azerbaijani territories. Azerbaijan also always stand with and supports Pakistan in all issues.

Azerbaijan and Pakistan are bound by the relations strong friendship and strategic partnership which reflects the will of our fraternal nations as well andboth countries attach great importance to its relations with each other. The relations between our two brotherly states accelerated and now demonstrate a rare example of solidarity.

If we look out for only one past year we can prove and confidently say that our countries have continued productive cooperation in all fieldsduring thid year too, including the political, economic, military, military-technical, defence industry, security, cultural, media, science, education, energy and humanitarian-social fields. 2nd meeting of Joint Working Group on Trade Cooperation was held in Islamabad and trade turnover between two countries increased around 25 % in 2018, some agreements were achieved and contracts were signed which of course, will boost our trade turnover in present year too. Only in past one year we had around 40 mutual visits of ministers, government and military officials from both sides, including the visit of Chairman of Senate, Chairman Joint Chiefs of Staff Committee of Pakistan, Minister of Defence of Azerbaijan etc.

This year for the first time the Azerbaijani military contingent participated in Pakistan National Day Parade. Different humanitarian-social works were continued to be implemented by Heydar Aliyev Foundation of Azerbaijan in Pakistan as well. The number of visitors, tourists between our countries increased more than 10 times in past two years and Azerbaijan Airlines has already presented its proposal to open direct flights to Pakistan.

Hope soon we shall witness the flight operations between two countries. As a sign of close friendship and cooperation State Oil Company of Azerbaijan Republic (SOCAR) offered oil and oil products to Pakistan with deffered payment and Economic Coordination Commitee alllowed PSO to sign agreement in this field. Last year SOCAR has also proposed investment project in Pakistan which is under consideration by Pakistani Government too. In 2018, Azerbaijan and Pakistan  have also started relations between space agensies of our countries for the first time and I am sure that it will also bring positive impact to our bilateral relations soon. There are a lot of fields in our relations where we can continue to speak positively and it makes us very happy.=DNA