ISLAMABAD, (DNA): President Dr Arif Alvi has said both the state and the society were equally responsible to show compassion and take care of the people with special needs.Addressing an Iftar dinner with special children at Aiwan-e-Sadr held by Heydar Aliyev Foundation of Azerbaijan to commemorate the International Children Day, the president said the guidance provided by the teachings of the Holy Quran, Holy Prophet (P.B.U.H) and His companions regarding the disabled persons were not merely for the state rather the whole society.

The event marked the impressive cultural performances by the special children which turned the audience emotional and earned a huge applause. 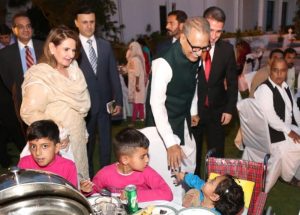 Started with the recitation of the verse from Holy Quran and Naat by two special children, the event was also attended by First Lady Samina Arif Alvi, Ambassador of Azerbaijan in Pakistan Ali Alizada, diplomats from various countries and the parliamentarians. 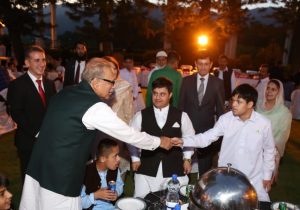 The president urged the societal as well as the state’s role to bring ease in the lives of special persons to make them enjoy the wordly pleasures.

Highly lauding the performance of the children on national and folk songs, the president said everyone must play his part for betterment of the special children including their education and upbringing.

He said the disability surveys in other countries revealed around 12 percent ratio of the disabled persons there, contrary to Pakistan where it stood at around 2 percent. He said this might be because the people in this society hesitated to record correct number of disable persons in their families.

He emphasized that the special children deserved equal compassion and love. 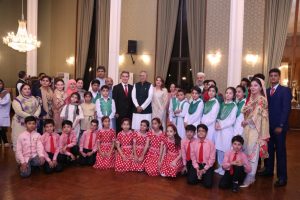 The president urged the state to ensure the true implementation of the jobs quota for the disabled persons.

He said the President House had hosted five to six Iftar dinners for the children during this holy month of Ramadan.

He president also shared with teary eyes the saddening news of the death of a child with Thalessaemia who had addressed the first Iftar dinner. The child had already lost his three brothers to the disease and had expressed his resolve to fight the disorder, which he unfortunately could not do.

The president said here comes the responsibility of the state to take care of such children.

He said new avenues of progress would continue to open up if the Pakistani nation kept up its tradition of wholeheartedly serving the disabled and other needy persons.

He lauded the contributions of Heydar Aliyev Foundation in the area of humanitarian cooperation and assistance given to several Pakistani social welfare institutions and charitable organizations since 2011.

Earlier, a 13-year old girl child also presented her book to the president.

In his remarks, the Azeri ambassador welcomed the president and the children on behalf of the Heydar Aliyev Foundation and the First Lady of Azerbaijan Mehriban Aliyeva to the event.

He said the presence of the president and the first lady was not only a manifestation of the support given by the president to the foundation’s work but also the strong bilateral relations that existed between Pakistan and Azerbaijan.

Later, the president and the first lady had group photos with the children. The first lady distributed gifts amongst the children jointly provided by the Pakistani philanthropists and the Heydar Aliyev Foundation.