ISLAMABAD, MAY 10 (DNA)- : Ambassador of Azerbaijan Ali Alizada along with embassy staff planted Bougainvillea trees, on the eve of  his 96th birth anniversary of Heydar Aliyev nationwide leader of Azerbaijan . 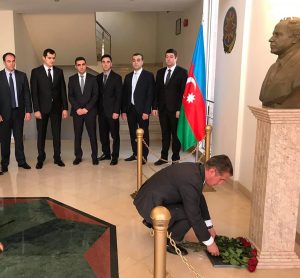 Heydar Aliyev devoted his all life to his motherland-Azerbaijan, to prosperity and well-being of his nation.

He will remain forever in the memory and hearts of Azerbaijani nation said ambassador Alizada in his message on the occasion.
He also laid flowers on the bust, and planted the Bougainvillea trees and flowers in the Embassy of Azerbaijan to honor late National Leader on his 96th birth anniversary.

The ambassador hoped that Bougainvillea trees, which are very beautiful looking, will remain as memory from staff of the embassy and people of Azerbaijan in Islamabad to honour of Heydar Aliyev.=DNA