By Ansar M Bhatti in Baku

BAKU, MAY 02 (DNA) – President of the Republic of Azerbaijan Ilham Aliyev has said that cultural dialogue was the only way to bring countries closer adding Azerbaijan has been the land of religious tolerance, peaceful coexistence of representatives of different nationalities.

President of the Republic of Azerbaijan Ilham Aliyev and first lady Mehriban Aliyeva attended the opening ceremony of the 5th World Forum on Intercultural Dialogue under the motto “Building dialogue into action against discrimination, inequality and violent conflict” at the Heydar Aliyev Center. 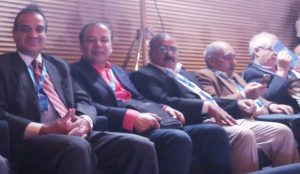 The President further said they had guests from more than 100 countries, more than 500 foreign representatives participate in the forum.

This shows that the forum in a relatively short period of time transformed into a global platform to address one of the most important issues of today’s agenda, issues of cultural dialogue, he added.

“I remember eight years ago, when we held the first forum probably we did not even imagine that the forum will get such a broad international support. Our initiative to organize world forum on intercultural dialogue in 2011, was based on our history, our geography, and our understanding that in order to make world safer we need to be very active on the issues of promotion dialogue between civilizations, between cultures, between representatives of different religions and ethnic groups”.

Today Azerbaijan’s rapid development is also based on this cultural heritage, also is driven by the solidarity which all the representatives of our society demonstrate.

“We are proud of our ancient history. One of the oldest mosques in the world is situated in the ancient city of Shamakhi. One of the oldest churches in the Caucasus, the church of Caucasian Albania, is situated in our ancient city of Shaki. Our history is the history of cultural diversity and today based on that historical heritage Azerbaijan demonstrates to the world that intercultural dialogue is the only way how to bring countries closer, how to establish more bridges between representatives of different religions and civilizations”.

The President said World forum on international dialogue, was one of the important international events globally, and of course for our country, but at the same time Azerbaijan during the last years hosted numerous international events, such as World Religious Leaders’ Forum, traditional Baku Humanitarian Forum, seven times we organized Baku Global Forum, which is also a very important platform to address the issues of political development and cultural dialogue.

“Last year we celebrated the 27th anniversary of our independence and during this period of time Azerbaijan transformed into a modern, developing country with modern infrastructure and with a very clear vision for the future”.

While talking about Nagorno-Karabakh issue, he said one of the main problems we are facing for many years is the Armenian occupation. For more than 25 years Armenia continues to Nagorno-Karabakh, and seven other districts of Azerbaijan.

“This is brutal violation of international law. Our people were subject of ethnic cleansing, more than one million refugees became homeless as a result of Armenian aggression and occupation”, he added.

United Nations Security Council adopted 4 resolutions demanding immediate and unconditional withdrawal of Armenian troops from our territories and these resolutions remain on paper.

The event then featured the screening of a video highlighting the history of civilizations, ongoing conflicts and acts of terrorism across the world, and the atmosphere of tolerance in Azerbaijan.=DNA