BAKU, APR 9 (DNA) – Azerbaijan`s population reached 10 million after a baby girl was born to the family of Rauf Hasanov and Nigar Ojaqova, who are the internally displaced people and former residents of Aghdara district which is currently under occupation by Armenia.President of the Republic of Azerbaijan Ilham Aliyev and first lady Mehriban Aliyeva have congratulated the people of Azerbaijan and the parents of the baby on this occasion and on the 9th of April President and First lady met with the parents of the baby. 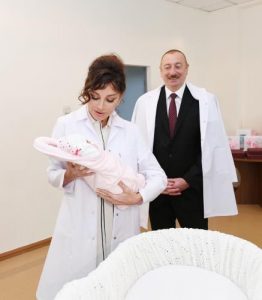 This is a very significant event in the history of independent Azerbaijan, while despite Armenia’s military aggression since early 1990s, the population of Azerbaijan is steadily growing.

This is the result of social and economic development in the country, which contributes to the welfare of its population in general and to the well-being of families and children in particular. =DNA