ISLAMABAD, MAR 21 (DNA) – Adel Elarbi, Ambassador of Tunisia to Pakistan has said bilateral relations between Tunisia and Pakistan are based on mutual understanding and solidarity.Tunisia and Pakistan are endeavored to translate their bound relations deeply rooted in history to foster and enlarge cooperation and partnership in all domains.He expressed these views while speaking on the occasion of 63rd anniversary of the Independence of the Republic of Tunisia. 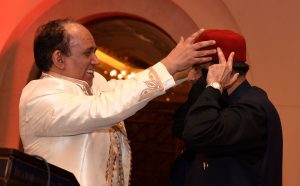 A large number of guests including diplomats; members of civil society and business community attended the reception. Federal Minister for food security Mahbood Sultan was the chief guest.

The ambassador said it is a glorious anniversary to commemorate the struggle of Tunisians for their freedom and dignity.

Since the independence, Tunisia has achieved remarkable accomplishments in several sectors particularly in the health and education fields.

This policy is attributed to the wise vision pursued by many Tunisian leaders including the leader Habib Bourgiba, the founding father of the Republic of Tunisia.

He said, Tunisia has also granted much importance to women’s rights and gender equality within the Tunisian society through the laws enacted in this framework such as the Personal Status Code that guarantees Tunisian woman’s rights.

Therefore, after the Tunisian Revolution on January 14, 2011, the country adopted a democratic transition aims at reinforcing the democratic values, enhancing human rights, good governance, sustainable development and comprehensive security in all aspects of life, the ambassador added.

The new progressive Tunisian constitution adopted in 2014, which is highlighted and appraised by the International Community, enabled the country to formulate different independent constitutional bodies for institutionalizing the democratic values and ensuring human rights for all Tunisians.

Ambassador Adel said, in 2019, Tunisia is the Capital of Islamic Culture for 2019 and is hosting several international important events such as the 30th Arab League Summit. In 2020 Tunisia will host the XVIII Summit of the Francophonie.

The country this year also is a candidate for a non permanent seat in the UN Security Council for the period 2020-2021.

During its mandate, Tunisia will play its role to defend the values of peace, stability, human rights, and sustainable development in conformity with the Charter of the United Nations. =DNA