ISLAMABAD, MAR 15 (DNA) – Cultural-musical event dedicated to the 100th Anniversary of Azerbaijan Diplomacy was organized in the Embassy of the Republic of Azerbaijan to Pakistan.Azerbaijani culture, music and cuisine were presented for the spouses of heads of foreign missions based in Pakistan.Wife of the Ambassador of Azerbaijan Mrs. Ali Alizada made elaborate arrangements for the event.Spouses of heads of foreign missions attended the event in large number and appreciated spell-binding cultural performances by Azerbaijani artists. 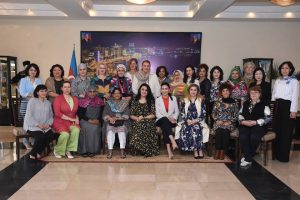 Azerbaijan is a country possessing rich cultural heritage and marvelous landscape. The country has achieved huge progress and development under the leadership of President Ilham Aliyev.

The country has excelled in all areas and is well-known for its humanitarian work worldwide. The Hyder Aliyev foundation is engaged in welfare activities for quite long time.

The Foundation, headed by the First Lady Mehriban Aliyeva, is actively engaged in Pakistan also in various projects including building of schools and hospitals.=DNA