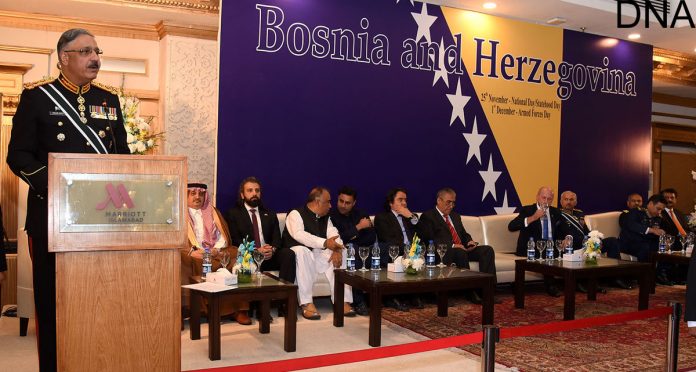 This double talk and double speak will have to end and finish. Pakistan had condemned terrorism in all its forms not only within Pakistan but in region and beyond. War on our Western borders has hit us for last 17 years.

The CJCSC was speaking as chief guest on the occasion of Nartional Day and Statehood Day of Bosnian and Herzegovina, on Friday night.

He said Pakistan had suffered economic losses in excess of 123 billion US dollars direct and 500 billion dollars indirect since 2001.

These operations have successfully targeted the terrorists and their hideouts and they fled the neighboring countries.

“We need to closely cooperate with each other to help humanity in general and put up joint struggle against these threats in the region and beyond and it is in that backdrop that we want to have close cooperation with Bosnia and Herzegovina”, Gen Zubair said.

He also talked about CPEC and termed it a jewel in the crown. He declared the CPEC a game changer adding Pakistan hopes and wishes that others also benefit from this project.

He said Pakistan hopes the internal situation in Afghanistan stabilizes soon and on our Eastern border India stops committing atrocities against the innocent Kashmir people. He said Pakistan genuinely wants an amicable and peaceful resolution of the outstanding and core issue and expected India to reciprocate in a positive manner.

Pakistan is pushing for resolution of Kashmir issue as per the UN resolution and the international agreements and expects all peace loving countries to help Pakistan achieve this objective, he added.

He suggested institutionalizing bilateral engagement with Bosnian and Herzegovina adding our bonds of friendship with Bosnia will grow even stronger in the days to come.

The audience present on the occasion observed one minute silence to pay respects to the martyrs of Chinese consulate attack.=DNA