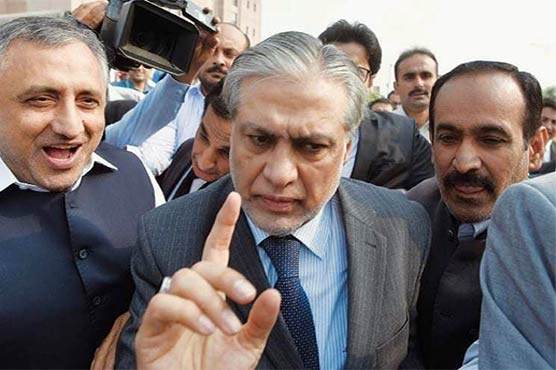 ISLAMABAD (DNA) – Supreme Court (SC) on Wednesday has conducted hearing of a case pertaining to bring back ex-finance minister Ishaq Dar to Paksitan for trial in asset beyond income reference.During the proceedings headed by Chief Justice of Pakistan (CJP) Mian Saqib Nisar, Additional Attorney General told that the questionnaire received from the British authorities regarding the case has been forwarded to National Accountability Bureau (NAB).

Earlier, Dar had visited British Home Office in abidance of law to inform them about cancellation of his passport by Pakistani authorities.

In the case, NAB had alleged, “The accused had acquired assets and pecuniary interests/resources in his own name and/or in the name of his dependants of an approximate amount of Rs831.678 million (approx)”.

In November last year, the accountability court had declared Dar absconder and rejected the minister’s petition in which he sought immunity from hearing of assets beyond known sources of income reference.

PML-N leader remained in London where he is reportedly undergoing a medical treatment for a heart disease.