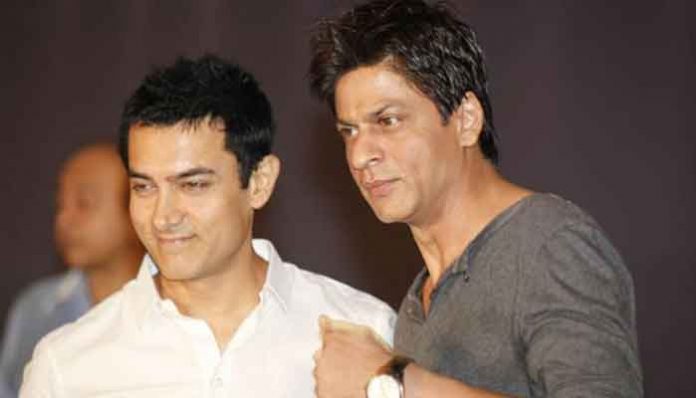 ” I don’t see myself as a star. But I do see Shah Rukh as a big star and everything else about him… He’s so charming, he’s so handsome and so well-dressed,” Fimefare recently quoted Bollywood actor Aamir Khan as saying.

Aamir Khan was all praise for his colleague with whom until recently he had a not-so-warm relationship.

Fans saw the ice melting between the two megastars when they posed for pictures together and complimented each other for their work on more than one occasions.

In a recent interview , Aamir Khan, who is known as Mr Perfectionist in the Indian film Industry, described Shah Rukh Khan as a bigger star then him.

“I wore a three-quarter pant and a T-shirt during Diwali. Those pants are so old that even the straps are coming off now.”

“I’ve been to Shah Rukh’s house when it was new.

He took me to his wardrobe. His wardrobe is as big as my entire house. And the clothes are kept in such an organised manner, categorised to the tee. Suits, shoes, socks everything kept so well. I was like, ‘Wow! Yeh hota hai star ka ghar’. Mera aisa nahi hai, mera sab confusion hai,” laughs Aamir.

Aamir Khan recently featured in “Thugs of Hindostan,” along with  Amitabh Bachchan.

The film has received negative reviews and is in free fall after breaking records on opening day. Some critics have called the movie a box office disaster .