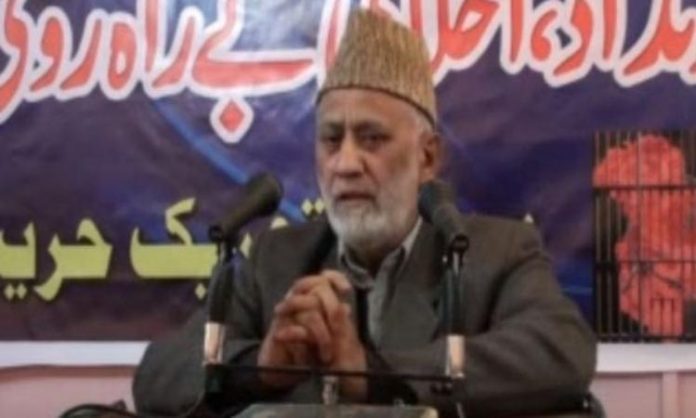 SRINAGAR, NOV 11 (DNA): Tehreek-e-Hurriyat Chairman, Mohd Ashraf Sehrai has said that arrests and unleashing reign of terror among masses can only further deteriorate situation.“New Delhi and its local supporters must understand this simple reality that Kashmir dispute will not be written off from the pages of history by using brute force to suppress the people’s voice,” Sehrai said, in a statement.

Terming it as ‘frustration’ of authorities, Sehrai said, “The police and other men in uniform have unleashed a reign of terror across the territory and the administration has broken all records of tyranny which is shameful.”

“Indian forces and Administration have made Kashmir a hell by their tyrant acts.” The jails and interrogation centres have been filled with innocent people and many have been shifted to jails outside Kashmir,” he said.

Sehrai said, “India and its supporters should stop violating fundamental and basic rights of Kashmiri people because it (India) is a signatory to UN charter which makes its every member responsible for people’s rights.”

“India should introspect and take concrete steps towards resolving the Kashmir dispute instead of using oppressive measures across Kashmir,” he said, adding that “India under a well-thought-out plan, was pushing the youth towards the wall and was utilizing every cheap tactic to weaken the freedom sentiment of Kashmiri people. It said India would never succeed in its nefarious designs.”

Sehrai appealed to the world human rights organizations especially the UN Human Rights Council and the International Committee of Red Cross to take cognizance of the arbitrary and illegal acts of Indian forces in the ‘occupied territory’. “Our youth is being subjected to vengeance by state authorities,” he said.

Paying his heartfelt tributes to Pulwama and Tral militants, Sehrai hailed the spirits of people and commended their sensitivity and seriousness towards resistance movement.

Sehrai said that “despite being weak and suppressed nation, we never accepted the forced occupation and resisted all type of tyranny tooth and nail.” DNA