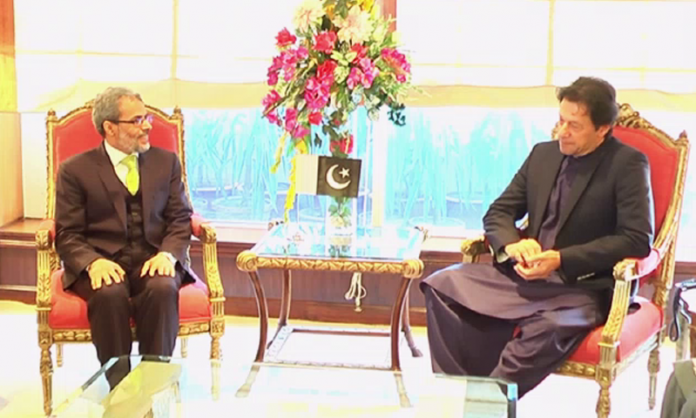 ISLAMABAD, (DNA) – Prime Minister Imran Khan in a meeting with Ambassador of Yemen Mohammed Motahar Alashabi in Islamabad on Wednesday assured the envoy of Pakistan’s “unwavering support in the early resolution of the conflict” in Yemen.

Ambassador Alashabi called on PM Khan at PM Office, where he congratulated the premier on his election and conveyed his leadership’s best wishes for the success of the newly elected government.

According to a PM Office press release, the prime minister reciprocated the sentiments of the Yemeni leadership and wished for an early end of hostilities for lasting peace in Yemen.

Ambassador Alashabi briefed the prime minister on the latest situation in Yemen. In turn, PM Khan assured the visiting dignitary of unwavering support from Pakistan for an early resolution of the conflict, in light of the United Nations Security Council Resolution 2216.

PM Khan also said that Pakistan will continue to support the restoration of President Abd-Rabbu Mansour Hadi’s government, and would play its role to bring all parties together for a political settlement.

While emphasising the need for dialogue, the prime minister said that the conflict in Yemen affects regional peace and stability and that it does not have a military solution.

He also called for more concerted and coordinated efforts at a global level to alleviate the sufferings of the Yemeni people and to ensure their safe return to their homes.

On the other hand, a debate raged in the Senate regarding Minister for Foreign Affairs Shah Mehmood Qureshi’s proclamation that Prime Minister Imran Khan has offered to act as a mediator in the ongoing Saudi-Yemen conflict.

Pakistan Peoples Party leader Sherry Rehman criticised the foreign minister’s statement and said that the Opposition’s apprehensions regarding this offer were not addressed by the government.

“The foreign minister made a long speech in Senate and while it revolved around the prime minister’s offer of acting as a mediator between Saudi Arabia and Yemen, he did not answer any of the questions put forth by the Opposition,” Rehman said.

Se added: “Pakistan publicly made this offer and Yemen refused it. How can Pakistan act as a mediator in the conflict when it is taking loans from Saudi Arabia?”

“Saudi Arabia could raise questions on Pakistan’s offer of acting a mediator,” she said, adding that the details of the loans taken from Saudi Arabia have also not been shared with the Parliament.