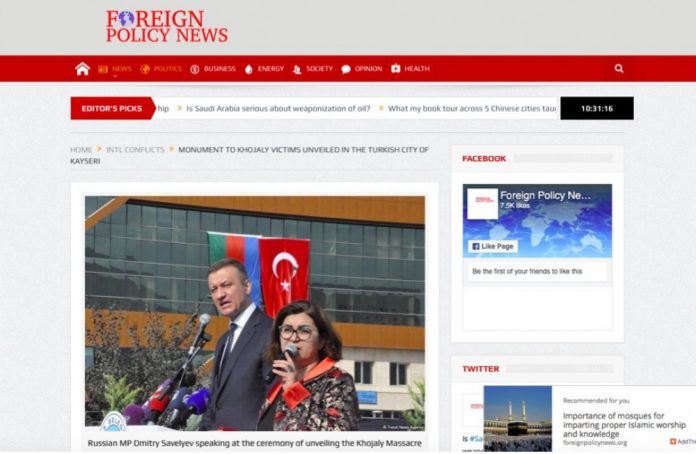 KHOJALY, (DNA) – The US-based Foreign Policy News portal has published an article headlined “Monument to Khojaly victims unveiled in the Turkish city of Kayseri”.The article reads: “In a sign of solidarity with its closest ally in the region, Turkey opened another park and unveiled another monument in memory of the victims of Khojaly massacre.

A number of high ranking Turkish and Azerbaijani officials took part in the opening ceremony, underlining the importance of official recognition of the mass killings.

Among the participants of the ceremony was the Russian MP, head of the Russia-Azerbaijan Inter-Parliamentary Friendship Group Dmitry Savelyev.

Speaking before a wide audience, he stated that 613 innocent people were killed as a result of the war crime. Calling it a genocide, he noted that the perpetrators of the largest mass killing in Caucasus in recent memory are yet to be brought to justice.

“We all have to make joint efforts in order to bring the truth about the Khojaly genocide to the whole world and ensure that those who committed this crime are punished,” said the Russian official.

Speaking of the importance of recognition of mass killings in Khojaly, Savelyev urged the foreign students in Kayseri who were in attendance of the ceremony to call on their elected officials to formally recognize the Khojaly massacre in their respective countries.

Khojaly massacre took place on February 25-26, 1992 when one of the only remaining Azerbaijani-populated towns in Nagorno-Karabakh region of Azerbaijan fell to the advancing Armenian troops.

In a matter of hours, the entire town was ethnically cleansed. According to the official numbers, 613 Azerbaijani civilians, including 63 children, 106 women and 70 elderly, were massacred in the town and its vicinity, making it the largest mass killing of civilians since WWII to date. Some 1,275 were taken hostage while more than 150 have reportedly gone missing.

The conflict between Armenia and Azerbaijan started in 1988 when Armenia, then part of USSR made territorial claims against Azerbaijan demanding unconditional transfer of Nagorno-Karabakh, the region of Azerbaijan.

During the war that lasted more than 6 years, Armenia managed to occupy Nagorno-Karabakh and seven surrounding districts of Azerbaijan which amounts to nearly 20 percent of the territory of Azerbaijan.

Four UN Security Council resolutions have been passed in 1993 demanding immediate and unconditional withdrawal of Armenian troops from the Azerbaijani territories. Armenia hasn’t complied so far.

The war ended with a Russian-brokered ceasefire in May 1994. Several large scale skirmishes, including one in April 2016, have taken place since then bringing the parties in conflict to the brink of war.”