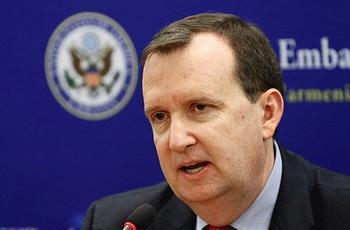 BAKU, (DNA) – Armenia will have to make compromises with Azerbaijan for resolving the Armenia-Azerbaijan Nagorno-Karabakh conflict, US Ambassador Richard Mills said in an interview.Although the diplomat is hoping that the transition in Armenia will generate more discussion on what Armenia’s options are and what Armenia is prepared to accept, Mills says he is been struck by how little discussion there was in Armenia about what would have been or is an acceptable solution and compromise.

Mills said that he was surprised when he first got there and found out that most Armenians he met adamantly opposed returning the occupied territories as part of a negotiation settlement.

He noted that return of land was one of the core principles of the Madrid Principles.

The reality is that any settlement is going to require the return of some portion of the occupied territories, he added.

In 1997-1998, then President of Armenia Levon Ter-Petrosyan proposed a plan to resolve the Nagorno-Karabakh conflict, implying the demilitarization of the occupied territories and the return of a number of settlements to Azerbaijan.

As a result, Prime Minister Robert Kocharyan, Minister of Internal Affairs and National Security Serzh Sargsyan and Minister of Defense Vazgen Sargsyan, dissatisfied with such a plan, actually forced him to resign before the completion of his term of office – February 3, 1998.

This led to 20 years of the Karabakh clan rule in Yerevan, which showed no intention to compromise and was incapable of conducting constructive negotiations.

Nikol Pashinyan, who became prime minister of Armenia as a result of a velvet revolution, who was sometimes considered a protege of Ter-Petrosyan, stayed in people’s memory in 2015 by his statement about the need to return the occupied districts around Nagorno-Karabakh.

Since the moment of coming to power, Pashinyan changed the rhetoric and has already started to talk about the “need for representatives of the separatist regime to participate in the talks”.

But in his recent interview with France 24, he stated that Armenia has not raised and does not raise the issue of changing the negotiation process on the Nagorno-Karabakh conflict.

The conflict between the two South Caucasus countries began in 1988 when Armenia made territorial claims against Azerbaijan. As a result of the ensuing war, in 1992 Armenian armed forces occupied 20 percent of Azerbaijan, including the Nagorno-Karabakh region and seven surrounding districts.

The 1994 ceasefire agreement was followed by peace negotiations. Armenia has not yet implemented four UN Security Council resolutions on withdrawal of its armed forces from the Nagorno-Karabakh and the surrounding districts.