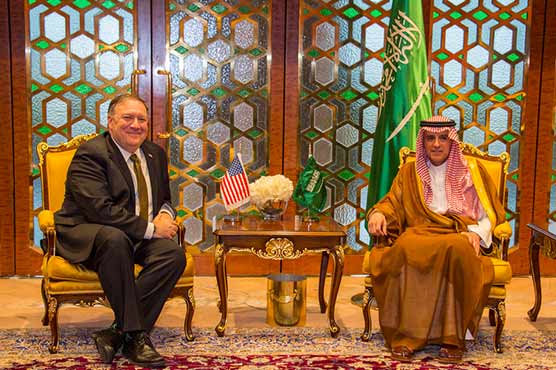 Khashoggi, a U.S. resident and leading critic of the Saudi crown prince, vanished after entering the consulate on Oct. 2. Turkish officials say they believe he was murdered there and his body removed, which the Saudis strongly deny.

President Donald Trump, who dispatched Pompeo to Riyadh amid strained ties with the key ally, has speculated that “rogue killers” may be responsible after speaking with King Salman.

After talks with the king, Pompeo met Foreign Minister Adel al-Jubeir and will have dinner with Crown Prince Mohammed bin Salman. He may go on to Turkey.

Overnight, Turkish crime scene investigators entered the Saudi consulate in Istanbul, the last place Khashoggi was seen before vanishing, for the first time and searched the premises for over nine hours, Reuters witnesses said.

A Turkish foreign ministry source said the police would search the consulate again on Tuesday as well as the consul’s residence, which Turkish television has previously reported could be linked to Khashoggi’s disappearance.

Turkish President Tayyip Erdogan, speaking to reporters in parliament, raised the possibility that parts of the consulate had been repainted. “The investigation is looking into many things such as toxic materials and those materials being removed by painting them over,” he said.

The case has provoked an international outcry against the world’s top oil exporter, with media and business executives pulling out of an investment conference next week.

During the initial consulate search, CNN reported on Monday that Saudi Arabia was preparing to acknowledge Khashoggi’s death in a botched interrogation, after denying for two weeks any role in his disappearance.

citing a person familiar with the Saudi plans, reported the crown prince had approved an interrogation or abduction of Khashoggi. It said the Saudi government, which could not be reached immediately for comment on the reports, would shield the prince by blaming an intelligence official for the bungled operation.

Turkish authorities have an audio recording indicating that Khashoggi was killed in the consulate, a Turkish official and a security source have told, and have shared evidence with countries including Saudi Arabia and the United States.

Pompeo was greeted at the airport by officials including Saudi ambassador to Washington, Prince Khaled bin Salman.