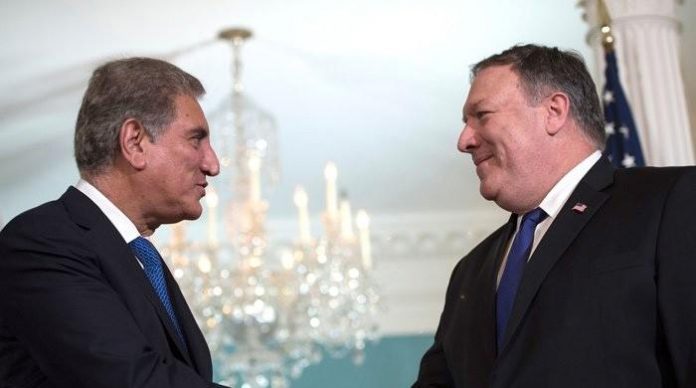 During his meeting with  the secretary of state, Qureshi discussed bilateral issues and matters pertaining to regional security.

Pakistan maintained that it wants to work with the US to bring peace and prosperity in Afghanistan, while the US President Donald Trump’s administration seeks Islamabad’s help in negotiating talks with the Taliban.

Qureshi was accompanied by Foreign Secretary Tehmina Janjua and Ali Jahangir Siddiqui, the Pakistani Ambassador to the US.

Earlier in  meeting with Bolton, Qureshi said Pakistan welcomed and supported the US’ renewed efforts  of political resolution for the Afghan conflict.

According to a statement, FM reiterated Islamabad’s long-held position that there was no military solution to the situation in Kabul, stressing the need of negotiated settlement of the conflict.

The foreign minister stated that Pakistan would continue to support the efforts for an Afghan-owned and -led peace and reconciliation process in its westside neighbour. The country regarded peace and stability in Afghanistan as vital for its own long-term stability and progress, he underscored, as per the statement.

Referring to Islamabad’s continued efforts to positively engage the national unity government in Afghanistan, Qureshi underlined that the Afghanistan-Pakistan Action Plan for Peace and Solidarity (APAPPS) offered the most effective mechanism to promote the mutually-beneficial cooperation between the two neighbouring states, the statement added.

The foreign minister also briefed his hosts, especially Washington’s security advisor, about India’s rising aggressive posturing in the South Asian region and underscored that Islamabad remained committed to engaging New Delhi in a comprehensive peace dialogue to resolve all outstanding issues, including the Kashmir dispute.

The two leaders agreed that a continued cooperation between Pakistan and the United States was in the interest of regional peace and security in South Asia.