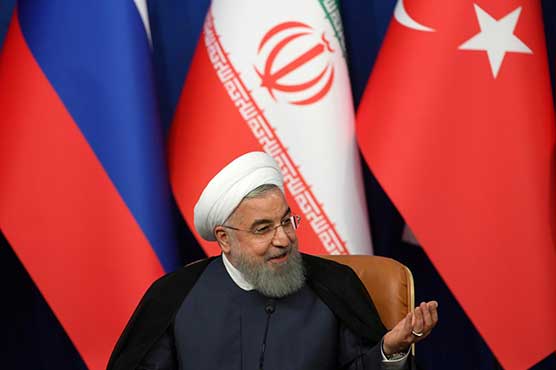 DUBAI (DNA) – US President Donald Trump will fail in his confrontation with Iran, just like Iraq s Saddam Hussein, Iranian President Hassan Rouhani said on Saturday, referring to the war between the two Middle Eastern powers and vowing that Tehran will not abandon its missiles.

Tensions have ramped up between Iran and the United States after Trump withdrew from a landmark multilateral nuclear deal in May and reimposed sanctions on the Islamic Republic last month.

As Rouhani spoke, Iran began displaying its naval power in the Gulf during annual parades in the capital Tehran and the port of Bandar Abbas on the Gulf marking the start of the country’s 1980-88 war with Iraq.

Iran has suggested in recent weeks that it could take military action in the Gulf to block other countries’ oil exports in retaliation for U.S. sanctions intended to halt its sales of crude.

Washington maintains a fleet in the Gulf that protects oil shipping routes.

“The same will happen to Trump. America will suffer the same fate as Saddam Hussein,” Rouhani said in a speech carried live by state television.

“Iran will not abandon its defensive weapons … including its missiles that make America so angry,” Rouhani said.

State media said about 600 vessels took part in the Gulf naval drill on Saturday, a day after Iran held aerial exercises in the waterway, vowing that a “pounding reply” awaited the country s enemies.