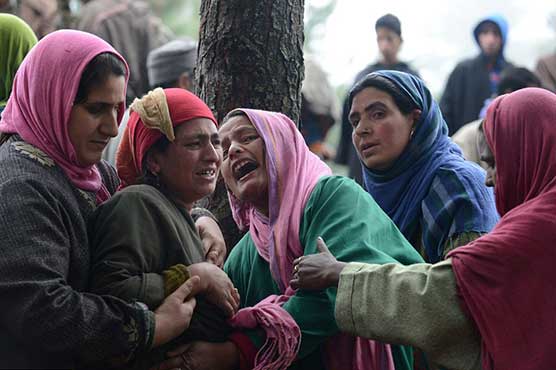 SRINAGAR (DNA) – Indian forces in occupied Kashmir, have on Friday in their fresh acts of state terrorism have martyred five youth in Bandipora district.Two of the martyred were killed yesterday while three today in Sumlar area of the district during a cordon and search operation.The bodies of all five militants killed in the gunfight had been retrieved, while the identity of the martyred youth is yet to be established.
Indian occupation forces had launched a cordon and search operation in the area.

On the other hand, Indian authorities had barred Aashura processions in Srinagar, today, after subjecting the mourners to brute force and arresting scores of them including Hurriyat leaders who were scheduled to lead them.

Juma prayers also could not be held at the historic Jamia Masjid and other mosques in the city due to restrictions. The authorities had created curfew-like situation in Nowhatta, Khanyar, Safa Kadal, Maharaj Gunj, Kothibagh and Rainawari areas while deploying Indian troops and paramilitary personnel in strength across the city.