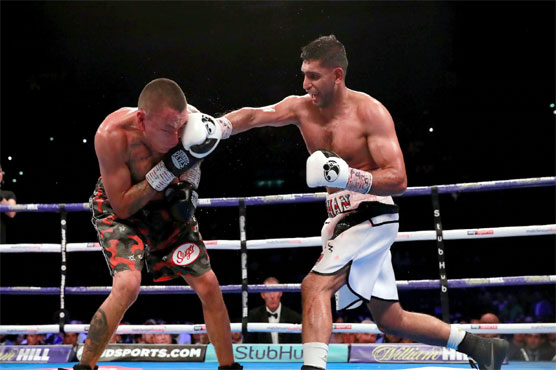 BIRMINGHAM, (DNA) – Pakistan-origin British Boxer Amir Khan has won the welterweight world title beating Samuel Vargas of Colombia in Birmingham on Saturday night.Khan managed to overcome his opponent in all 12 rounds of the game, with the decision of his win made on points.

In Birmingham, Khan took lead by dropping his opponent Samuel Vargas with his blurring speed of hand in the second round, the former light-welterweight world champion was then floored himself, but recovered to win by a unanimous points decision.

He fell to the canvas, 8000 adoring fans witnessed the narrative of Khan s 33 victories in his thirteen-year career. Thrilling, exciting, but always vulnerable.

Finally, Khan won the fight on points, over twelve rounds, 119-108, 119-109 and 118-110 on the judges  cards, in what was an eliminator for the World Boxing Association welterweight title held by Manny Pacquiao.

Khan has expressed to have a fight with Manny Pacquiao.

Moreover, British rival Kell Brook was also ringside, itching to get his arch foe to sign to fight in December.

Khan recovered from that second round blemish to scrape to a win, but Khan fights have never been, nor will they ever be, dull.

While admitting his carelessness Khan said, “I m happy with the performance, apart from being caught in the second round.”